“Newport is an amazing place that I’m very fond of. What an exciting opportunity to be a part of the festival and cook in such a spectacular setting as Marble House,” said Chef Lagasse. 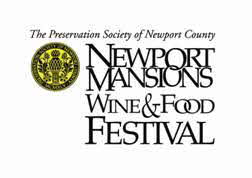 The 7th annual Newport Mansions Wine & Food Festival begins Friday, September 21 and runs through Sunday, September 23, featuring more than 100 of the world’s finest vintners and some of the region’s finest restaurants and caterers.  Sponsored by FOOD & WINE magazine, the Festival takes place in one of America’s most picturesque settings—the historic Newport Mansions, Rosecliff and Marble House, in the seaside resort of Newport, Rhode Island.  All proceeds from the Festival benefit The Preservation Society of Newport County, which preserves and maintains the Newport Mansions.

Chef Lagasse will stage a cooking demonstration during the Sunday afternoon Grand Tasting at Marble House, and also appear for a book signing.

“The name ‘Emeril’ resonates even with people who don’t consider themselves to be ‘foodies,’” said Preservation Society CEO & Executive Director Trudy Coxe.  “His appearance will create lots of buzz and help to bring in a new audience to experience the Festival, especially because of his personal ties to the region.  We’re thrilled to have him join us.”

Chef Emeril Lagasse is the chef/proprietor of 13 restaurants.  As a national TV personality, he has hosted over 2,000 shows on the Food Network, and is the food correspondent for ABC’s “Good Morning America.”  Chef Lagasse is also the best-selling author of 16 cookbooks.     He grew up in Fall River, Massachusetts, and graduated from Johnson & Wales University in Providence, Rhode Island.

Also appearing at the Festival will be Chef Jacques Pépin and his daughter Claudine, an accomplished cook in her own right who has partnered with her father on several of his television programs.  The Pépins will host a cooking demonstration and book-signing during the Saturday afternoon Grand Tasting at Marble House.

All proceeds from the Newport Mansions Wine & Food Festival benefit The Preservation Society of Newport County, a non-profit organization accredited by the American Association of Museums and dedicated to preserving and interpreting the area’s historic architecture, landscapes and decorative arts.  Its 11 historic properties—seven of them National Historic Landmarks—span more than 250 years of American architectural and social development.

Tickets to this remarkable weekend of fine wine and food are on sale now.  For more information and to purchase tickets, visit www.NewportMansionsWineandFood.org, or call (401) 847-1000.