The award recognizes Pennsylvanians who masterfully use locally sourced foods in an artistic and expressive form, while educating consumers and peers about the state's agriculture industry.  Entrants must be leaders who have demonstrated a continued commitment to excellence in the culinary arts. They must work in the industry, either as a chef, restaurateur, purveyor or agricultural producer, and live in Pennsylvania.

"Pennsylvania's 63,000 farm families grow a bounty of quality agricultural products, including fresh produce, meats and dairy products," said Redding. "Our state's talented culinary artists creatively utilize these fresh, local ingredients in their cuisine, helping to keep money in our local communities and drive our state's economy. It's important that we recognize these talented culinarians and thank them for their commitment to keeping Pennsylvania growing." 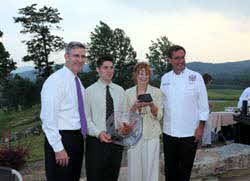 The Governor's Award for the Culinary Arts is a cooperative effort of the Department of Agriculture and the Pennsylvania Culinary Society, an association of chefs, inn keepers, farmers, food producers and food lovers working to develop a distinctive Pennsylvania food style based on the state's agricultural products and rooted in its rich food heritage.
To be considered for recognition, nominees must be an executive chef, owner, partner, or individual who has demonstrated a continued commitment to excellence in the culinary arts by developing and advancing consumer knowledge and appreciation of fine cuisine by making the use and recognition of local products a priority, and by educating the culinary community.

Each year, the award is presented at the Gettysburg Festival, a celebration of arts, culture and cuisine.  The 2010 Festival, June 18-27, offers more than 100 events with more information available at www.gettysburgfestival.org or by calling 717-334-0853.

Nominations are due June 1. Nomination information is available at www.papreferred.com or by calling Frank Jubala at 717-783-8462.