‘The Greatest Free Show on Earth!’

A Short History
This far famed and unique agricultural exhibit and street fair had its humble origin in October, 1903, when George R. Haswell, then Mayor of Circleville, and superintendent of the water works, conceived the idea of holding a small exhibit in front of his place on West Main Street. Corn fodder and pumpkins (many of them cut into Jack- O-Lanterns) formed the principal deco- rations, and were responsible for it being dubbed "the pumpkin show". On the following year Mr. Haswell was joined by some enterprising neighbor- hood merchants and the exhibition grew steadily in its scope, interest and attendance. The first merry-go-round was set up at the corner of Main and Scioto Streets for the 1905 show. 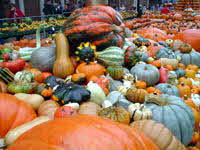 Later a permanent organization (of which the Mayor is always president in honor of the founder) made up entirely of volunteers, resolved to hold an annual Pumpkin Show on the streets of Circleville for the purpose of maintaining and promoting a more friendly relation- ship with the patrons and visitors of the community, and to further promote and extend agricultural pursuit and to award premiums for the display of grain, fruits and vegetables, school displays, and such other displays that are best calculated to promote the best interests of Circleville and Pickaway County. 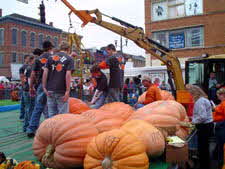 Every alert to keep the Pumpkin Show fair, clean and above reproach in every respect has contributed largely to its becoming the sixth largest festival in the United States with an annual attendance in four days and nights of over 300,000 persons and its claim to being the "GREATEST FREE SHOW ON EARTH" as no admission charge or entry fee is made. 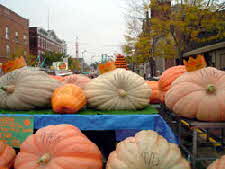 No special recognition is given any individual or group of individuals as the success of the Show is due to complete cooperation of everyone in Circleville and the Pickaway County area. The Circleville Pumpkin Show really is best explained by the Third Article of the Constitution which reads as follows:

"The purpose or purposes for which said corporation is formed are: To provide for and hold an annual Pumpkin Show upon the streets of Circleville, Ohio, and to promote and encourage fellowship among patrons, visitors, and citizens of the community, and to pro- mote the general welfare of agriculture, manufacturing, and mercantile interests of the City and surrounding territory and to demonstrate the resources of Pickaway County, and for such other purposes as may be incident to and to all things reasonably necessary and proper to carry out said purposes." 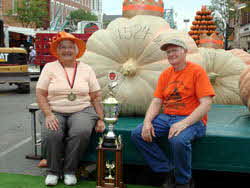 It is the plans of the Circleville Pumpkin Show Inc. to perpetuate the Show as an annual affair, to improve features each year as interest and finances permit, and to keep our slogan "THE GREATEST FREE SHOW ON EARTH" a reality.

The Circleville Pumpkin Show is held on the streets of downtown Circleville. The early shows covered about 3 city blocks and today it covers more than 8 city blocks. The streets are filled with  25-30 Amusement Rides and over  300 Food Booths, Games & Craft Vendors.

(2009) The Circleville Pumpkin Show attracts over 400,000 visitors (100,000 per day) to this small community of 12,000 people. They come to see the giant pumpkins, the world's largest Pumpkin Pie, parades, entertainment, attractions, and try various pumpkin-flavored delicacies.