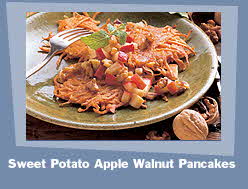 The perfect addition for any brunch. The indulgent Apple Walnut Topping with the Sweet Potato Pancakes makes this a hard combination to beat. Don’t let shredding the potatoes scare you away from this delicious dish as potatoes are easily shredded with the shredding blade of the food processor.
Also see Article:
Louisiana Sweet Potatoes


In a bowl, combine the shredded sweet potatoes, flour, baking powder, cinnamon, honey, egg and egg whites with a fork until well blended.

Heat a nonstick skillet coated with nonstick cooking spray, and drop about 2 tablespoons (about 3 inches each) into hot pan.

Flatten slightly with a spatula and cook pancakes over medium heat until golden on both sides.

Set cooked pancakes on plate and continue cooking until all pancakes are cooked.

In a skillet, add all the ingredients and cook over medium high heat, stirring, until the apples are tender and the brown sugar has melted to form a syrup.
This is so good, it would even be great over ice cream!