Recipe below
Beautifully poised balance and harmony. Gaining popularity on the cocktail scene and as a versatile wine for cooking, sake finds a befitting partner in the quintessentially French unison of multicolored peppercorns. The balanced heat of peppercorn mĂ©lange accents the clean vigor of a centuries-old Japanese beverage.

The lively blend adds a montage of pungent, hot flavors and softer, cedar-like undertones. Once considered the “drink of the gods,” sake dates back more than 1,800 years. The medley of flavors found in different styles of this fermented rice wine – ranging from fruity sweet and acidic to dry and slightly bitter – hints at its flexibility as an ingredient.

Taste the unity of these flavors in Peppercorn MĂ©lange Chicken and Udon Noodles in Lemon Grass-Sake Broth (featured on the cover) or in a Sake Green Tea Martini with Crushed Peppercorns. The combination also comes to life as a mixture for curing salmon or hamachi, a mignonette sauce with freshly shucked oysters, or with mixed berries in a peppercorn-sake syrup. 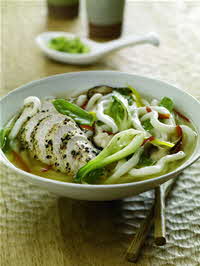 “This pairing is very creative and fun; we love combining flavors that might be juxtaposed to surprise the palate. The possibilities of sake and peppercorn mĂ©lange are endless.”
Justin Beam, Mixologist | Fearing’s, Dallas

Directions
1. Place 1 teaspoon of the peppercorns in large resealable plastic bag.  Close tightly. Pound with a rolling pin, mallet or heavy skillet until coarsely cracked.  Mix with sea salt.  Press seasoning mixture onto both sides of chicken breasts.  Grill over medium-high heat 6 to 8 minutes per side or until chicken is cooked through, turning frequently.  Keep warm.

2. Place remaining 1 teaspoon peppercorns and lemon grass stalks in the center of a piece of cheesecloth or a coffee filter.  Tie tightly with a long piece of string.