Episode Description
16 of America’s Best Cooks arrive at Food Network for the chance to compete for $50,000 and the title of America’s Best Cook. Hosted by Ted Allen, the cooks are divided into teams that are mentored by Cat Cora, Tyler Florence, Alex Guarnaschelli and Michael Symon, each representing the South, West, East and North respectively. The series kicks off with a timed culinary challenge where the cooks divided into groups of four compete for coveted positions on the mentor’s teams. Following the challenge, each mentor tastes the dishes of four hopeful cooks and chooses the two for their team that they believe will lead them to victory. The mentors guide their cooks through the next five weeks of competition and if both of their cooks are eliminated, they too are out of the competition.
Mentors: Alex Guarnaschelli, Michael Symon, Cat Cora and Tyler Florence
Host: Ted Allen 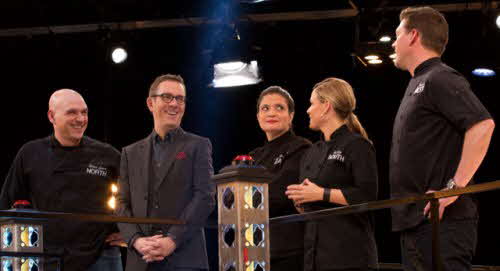 About America's Best Cook
In this new six-episode series hosted by Ted Allen, Food Network takes home cooks out of their kitchens and into the most intense arena to see who is the best home cook in America. Four Food Network stars — Cat Cora, Alex Guarnaschelli, Michael Symon and Tyler Florence — representing four different regions of the country will choose two home cooks to compete on their team and battle through a succession of ever-more-difficult challenges. Coaches will dedicate themselves to developing their team and mentoring their cooks — because if their cooks go home, so do they. Everything is on line in the search to find America’s Best Cook!