The Turkey Cannon, which can roast a 12-pound turkey in less than 90 minutes, has been redesigned for easy cleaning and storage, just in time for the holidays

LOGAN, Utah – November 1, 2006 – Camp Chef, a Utah-based manufacturer of high-end cooking equipment, has introduced a new, redesigned version of its popular Turkey Cannon that is easier to clean and easier to store and is perfect as a gift for Thanksgiving and Christmas chefs.

To make it even easier to clean and store than before, the new Turkey Cannon utilizes a two-part “cassette” design construction consisting of a wire rack and the Turkey Cannon’s roasting cylinder, a curved tube that can be joined and separated with a simple slide and snap motion. 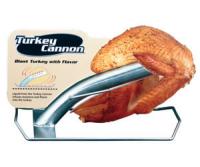 Originally introduced in 2005, the Turkey Cannon allows chefs to slip a turkey or large chicken onto the roasting cylinder, which can be filled in advance with a chef’s favorite broths or marinades and is the key to roasting a great bird. The Turkey Cannon and bird then sit easily on top of a cookie sheet in a kitchen oven or inside an outdoor barbeque grill where baking infuses the meat with moisture and flavor from within while the poultry roasts on the outside. The result is a 12-pound turkey that can be roasted in less than 90 minutes resulting in meat that is amazingly moist and tender.

“The Turkey Cannon was originally intended to make it easier for BBQ fans to prepare ‘beer can turkey’ on the grill,” said Ty Measom, Camp Chef president and inventor of the patented Turkey Cannon. “However, early tests showed that besides resulting in a very tender turkey, the Turkey Cannon also roasted birds as large as 24 pounds in half the time. Because of this, the Turkey Cannon is becoming a phenomenon that is expanding beyond the niche of die-hard grillers.”

Liquid placed inside the roasting cylinder creates steam inside the turkey or chicken cavity, which helps cook the meat from the inside as well as the outside. Consequently, indoor chefs and cooks find the Turkey Cannon reduces time spent in the kitchen, which is especially helpful during the busy holiday season. After using it to roast a great turkey, the Turkey Cannon can be easily disassembled for quick cleaning and the roasting cylinder can be laid flat against the rack for convenient storage.

The manufacturer’s suggested retail price for the Turkey Cannon is $24.99, and is sold through select retailers and on-line merchants. Those interested in finding out more about the Turkey Cannon and how to cook a delicious, tender turkey in half the time should visit www.turkeycannon.com.

About Camp Chef
Established in 1991, Logan, Utah-based Camp Chef is a privately held manufacturer of high-end cooking equipment for outdoor and indoor enthusiasts. Camp Chef is devoted to bringing its customers innovative and cutting edge modular cooking systems ranging from quality cast iron Dutch ovens and skillets, powerful propane outdoor cook stoves, and most recently, the Turkey Cannon, which can roast a 12-pound turkey in less than 90 minutes. To see what’s cookin’ at Camp Chef, please visit www.campchef.com or call 800.650.2433.
---------