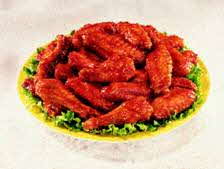 “The trick to my tasty and healthy wings is I boil them first,” says Kevin Roberts. “That knocks off a lot of the fat and makes them nice and tender. Then you can throw them on the grill and get ‘em nice and crispy.”
Serves 4

1. Boil the wings in a large pot for 10 minutes. Drain water and excess fat from wings when done.

2. Grill wings on barbecue until crispy.

3. In a large bowl, add the butter and melt in microwave.

5. When wings are nice and crispy, add them to the bowl and coat them well.