Nearly 9 billion pounds of rice are produced in Arkansas annually, harvesting about 1,785,000 total acres in 2010.

Arkansas produces over one billion broiler chickens each year and ranks second in the nation in broiler production, third in turkeys and eighth in eggs. (2011)

More than 3 million acres of Arkansas land are planted with soybeans, with each acre producing around 35 bushels – yielding nearly 110 million bushels of soybeans during 2010-11.

Pigs were first introduced to Arkansas by the Spanish explorer Hernando de Soto in 1541. Pigs that escaped from his expedition are probably the ancestors of the wild “Razorback” hogs famed as the mascot for the University of Arkansas.

Milk was designated as the official state beverage of Arkansas in 1985.

The Dutch Oven was designated as Arkansas official State Cooking Vessel in 2001. 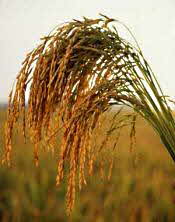 In 2007 Arkansas designated Rice as its Official State Grain

Arkansas is the largest producer of rice in the U.S. accounting for about 46% of U.S. rice production. Rice is grown on about 1.3 million acres in Arkansas. (2008)

The apple blossom was named the official state flower of Arkansas in 1901.

Alma, Arkansas is the Spinach Capital of the World.

The largest brown trout caught with a fishing pole weighed over 40 pounds and was caught in Arkansas on May 9, 1992.

The white-tailed deer was designated as the Arkansas State Mammal in 1993.

Most people think about turkey for Thanksgiving, but in Stuttgart, Arkansas, the World Championship Duck Calling Contest takes place Thanksgiving week. More than 60,000 people attend the festival, which is the oldest in the state. The first duck-calling contest, held in 1936, had 17 contestants, with the first prize of a hunting coat valued at $6.60. Today the contest is held in six divisions, including junior, intermediate, and women, and the prize is worth more than $15,000.
There are four basic types of duck calls. The 'hail call' is a series of loud, pleading quacks that attract a flock's attention. Once you see ducks react to the hail, either by turning or slowing down, stop hailing them. As the ducks get closer, switch to a 'greeting call,' a series of five excited quacks. Then you use the 'feed call' when they get close. Done properly, it mimics a group of contented ducks on the water. If the ducks are leaving, try the 'come-back call.' It's similar to the greeting call, but with louder, longer, pleading quacks. If your come-back call makes the ducks turn around, go back to the feed call. All of this quacking may sound easy, but it isn't. Just try it and see!