Though this intriguing berry grows wild in many locations throughout the continental United States, it's generally cultivated in tropical zones such as Hawaii, Australia, New Zealand, South Africa, Asia, and Central and South America. At first glance the cape gooseberry with its inflated, papery skin, looks somewhat like a Chinese lantern. The bittersweet, juicy berries that hide inside the skin are opaque and golden in color. Imported cape gooseberries are available from March to July.

The English had a passion for gooseberries and in colonial days gooseberry wines, pies and puddings were very popular. However, today many of those recipes have all but disappeared from cookbooks. 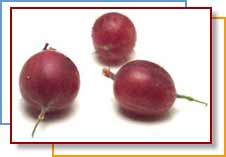 Gooseberries are cultivated on a commercial scale in Oregon, but the vast majority of the crop is canned. Fresh berries are usually imported and are found in specialty produce markets. The popularity of gooseberries has been increasing over the past few years and fresh berries are becoming easier to find. The berries taste of a sweet tangy mixture of pineapple and strawberry. The fruits make an interesting addition to salads, cooked dishes, and as a garnish.

Selection
Choose hard, dry berries, with a rich sheen. If you are looking for less tartness, head for the pinkish or purplish tones. Look for those with a bright golden color; green berries are not ripe. However, pick gooseberries green for pies and jams.

Storage
Gooseberries store well and will stay fresh in the refrigerator for about two weeks. They should turn pinker and softer during their time in storage. Once they turn purple, the fruit is still good for purees for another week.

Preparation
Gooseberries vary is their bitterness. Some varieties are too bitter to eat raw, so taste one first. The less-bitter varieties of gooseberries are often added to fruit salads or used as garnish for dessert plates. To use the berries, peel back the parchment-like husk and rinse. Remove the stems and tops with scissors before eating or cooking. Gooseberries may be poached and eaten cooked or added to sugar or syrup for a sauce. To retain the shape of the berry, poach slowly. They are done when the seeds have escaped and the skins collapse.

Varieties
There are two types of gooseberries, the American and the European. The European varieties have larger and more flavorful fruits.

Pixwell: (American) This variety produces round 1/2-inch berries that are light green, maturing to a soft pink.

Welcome: (American) This variety produces a sweeter and darker fruit at maturity than the Pixwell and also produces a 1/2-inch berry.

Clark: The most productive of the European gooseberry types. The berries are very large and red when ripe.

Make Gooseberries Part of Your 5 A Day Plan
* Cook with apples or ginger to make a distinctive dessert.
* Try drying the fruit to make a tasty treat.
* Add gooseberries to your favorite salad.
* Introduce it to others by using it as a garnish.
* Make it into jam.