Limes may be most famous for their historical benefits to sailors. Limes are packed with Vitamin C and were eaten on ships to prevent scurvy, a disease caused by that vitamin deficiency. In the eighteenth century, all British naval ships assigned to long journeys were required to carry limes. The nickname “limeys” for British sailors has continued to this day.

Limes were originally grown on the Indian subcontinent and were popularized in Europe about the time of the Crusades. In the United States, limes were established in what is now named Florida by the sixteenth century. Today limes are grown in Florida, the Southwest, and California. 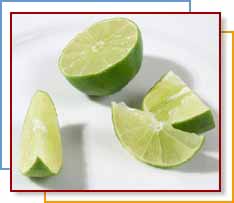 Selection
Select limes that are glossy and light to deep green in color. Limes should have a thin, smooth skin and be heavy for their size. Small brown areas on the skin should not affect flavor, but large blemishes or soft spots indicate a damaged lime. Ripe limes are firm, but not hard. Avoid limes that have a yellowish skin or are too small. A hard shriveled skin is a sign of dryness, as is a coarse thick skin. Limes are available year round in most supermarkets. 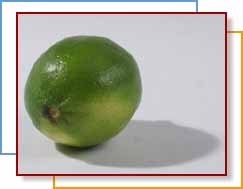 Varieties
The majority of limes are part of the Tahitian strain, believed to have originated in Tahiti. There are two common varieties of that strain: Persian and Bearss. The Persion is egg-shaped and contains seeds. The Bearss is smaller and seedless. Key limes are smaller and rounder than the Tahitian strain and have a higher acid content. These limes are mostly used in baking.

Preparation
Wash well before using, even if you are only using the juice. Limes are usually eaten raw, but may be included in baked or grilled dishes. Many recipes call for fresh lime juice. To juice by hand, roll the lime on a firm surface before squeezing out the juice.

Limes are also often used as garnish. Simply slice the lime in half and slice into several sections. Limes or lime juice are a great salt substitute and add a tangy flavor.

Make Limes Part of Your 5 A Day Plan
-Marinate fish in lime juice for a great flavor and serve topped with lime slices.
-Make limeade instead of the usual lemonade for a fruity summery treat.
-Include lime in your citrus sorbet for a change.
-Add thick slices of lime to make tangy summer kebabs on the grill.
-Garnish a fruit plate or salad with limes to add color.
-Use in tea as you would a lemon.

*Percent Daily Values are based on a 2,000 calorie diet.
**Contains less than 2 percent of the Daily Value of these nutrients.