The cucumber (Cucumis sativus) is a member of the Cucurbitaceae family and is related to melons and squash.

The inside of a cucumber can actually be up to 20 degrees F cooler than the outside temperature. 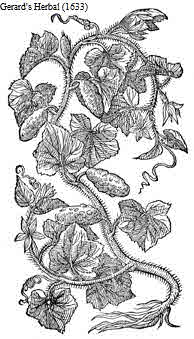 Cucumbers are one of the oldest cultivated vegetables, having been cultivated since about 8,000 B.C.

Bitterness in cucumbers can be caused by any stress on the plant such as high temperature, low moisture, low soil nutrients, etc. Bitterness is also associated with fruit harvested late in the season from poor yielding, unhealthy plants.

Cucumbers were believed to have originated in India and spread through Greece and Italy. They made their way into North America agriculture by the mid-16 century. Cool and moist due to their high water content. 'Cukes' belong to the same family as pumpkins, zucchini, watermelon and other squashes.
CDC.gov - 5 a Day

In Roman times, the Emperor Tiberius grew cucumbers in carts, and had his slaves wheel them around to catch the sun. 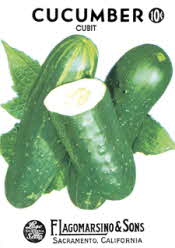 Anyone allergic to pollen or aspirin should avoid eating cucumbers. They can cause an unpleasant mouth itch.

Cucumbers are about 95% water, and have very little nutritional value.

Cucumbers were brought to the Americas by Columbus.

General Ulysses S. Grant was said to have been extremely fond of cucumbers. General Horace Porter remarked in an article, ‘Campaigning with Grant’, the General "often made his entire meal upon a sliced cucumber and a cup of coffee."

There are 31 people in the U.S. listed on whitepages.com with the last name 'Cucumber' and they all live in North Carolina.
(Mark Morton, 'Gastronomica', Fall 2010)

Anyone allergic to pollen or aspirin should avoid eating cucumbers. They can cause an unpleasant mouth itch.

Cucumbers are about 95% water, and have very little nutritional value.