Radishes were first cultivated thousands of years ago in China, then in Egypt and Greece. Radishes were so highly regarded in Greece that gold replicas were made. The radish did not make its way to England until approximately 1548. By 1629 they were being cultivated in Massachusetts.

Radishes are root vegetables that resemble beets or turnips in appearance and texture, but have a distinct flavor. It is the root of a plant classified in the mustard family. 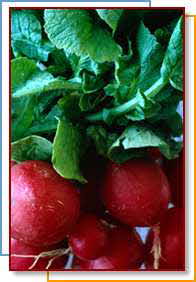 VARIETIES
There are five main varieties of radishes.

Red Globe
This variety is the most popular in the United States and is the familiar looking red and white radish. It is small, round or oval shaped, sometimes referred to as "button" red radishes. They range in diameter from one to four inches (most commonly closer to one inch) and have a solid, crisp, flesh. Available year-round.

Black
This variety is turnip-like in size and shape, approximately eight inches long. Black radishes have a dull black or dark brown skin. When peeled, their flesh is white, quite pungent, and drier than other radishes. Black radishes have a longer shelf-life than most radishes, so they are available year-round, although the crop peaks in winter & early spring.

Daikons
This variety is native to Asia. They are very large, carrot-shaped radishes that are up to 18 inches long and weigh one to two pounds. Daikons have a white flesh that is juicy and a bit hotter than a red radish, but milder than black. Available year-round, but are most flavorful in fall and winter.

White Icicles
This variety is long, up to a half foot, and tapered. They have a white flesh that is milder than the red variety. Generally available year-round.

Selection
Radishes with their leaves intact are usually tied in bunches, while topped radishes are sold in plastic bags. If the leaves are attached, they should be crisp and green.
Whether red or white, roots should be hard and solid, with a smooth, unblemished surface. Avoid soft or spongy radishes. Be sure to check bagged radishes for mold before purchasing. Black radishes should be solid, heavy and free of cracks. This variety is often found in Russian or Polish neighborhood stores. Daikons, found most easily in Asian markets, should be evenly shaped and firm, with a glossy, almost translucent sheen.

Preparation
Scrub radishes and trim off the stem end and tip. You may peel the radishes or leave the skin intact. The skin is responsible for much of the pungency, so the black radish is most often peeled for those not accustomed to this variety. However, the red globe and white icicle radishes are rarely hot enough to warrant peeling.

Small radishes can be served whole or chopped; while black and daikons are usually cut or grated.

The most common uses for radishes are as a garnish or as an ingredient in a green salad.