Brussels Sprouts were named after the capital of Belgium where it is thought that they were first cultivated. They are also one of the few vegetables to have originated in northern Europe. They were first introduced to France and England in the nineteenth century where they continue to be a popular food. French settlers who settled in Louisiana introduced them to America.

Brussels sprouts look like miniature heads of cabbage. They are similar to cabbage in taste, but they are slightly milder in flavor and denser in texture. Brussels sprouts and cabbage are members of the cruciferous vegetable family. These vegetables contain significant amounts of the antioxidants vitamin C and beta-carotene (vitamin A), and nitrogen compounds called indoles which may reduce the risk of certain cancers. 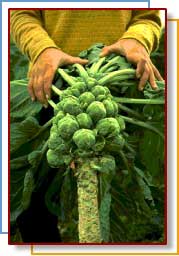 Brussels sprouts are a good source of vegetable protein, because 31% of the calories come from protein. Do remember though that it is an incomplete source of protein and should be complemented with whole grain foods during the course of the day.

Most Brussels sprouts are grown in California. They are available all year round, but their peak-growing season is in autumn through early spring.

How To Select
Choose firm compact sprouts that are bright green in color. Fresh Brussels sprouts should be displayed chilled. If they are kept at room temperature, their leaves will turn yellow quickly. Yellow or wilted leaves are signs of age or mishandling. Old sprouts also have a strong, cabbage-like odor. It is best to choose sprouts individually from bulk displays rather than pint or quart tubs. Choose small, firm, compact sprouts with unblemished leaves. Select sprouts that are similar in size. This will allow them to cook more evenly. Avoid sprouts that are puffy or soft.

Storage
Do not wash or trim sprouts before storing them, but yellow or wilted outer leaves may be remove. If you have purchased sprouts that have been packaged in a cellophane-covered container, take off wrapping, examine them, remove any that are in bad condition, return them to container, re-cover with cellophane, and refrigerate. If the sprouts are not fresh, return them to the store. Place loose sprouts in perforated plastic bag. Fresh sprouts will keep for 3–5 days.

Preparation
Remove any yellow or wilted outer leaves. Trim stem ends. Be careful not to trim stems flush with the bottoms, or the outer leaves will fall off during cooking. Cut a shallow "x" in the base with a small, sharp knife. This will allow the heat to penetrate the solid core so that it cooks as quickly as the leave.

Boil
Use one cup water for every cup of Brussels sprouts. Bring water to a rapid boil in a large pot, add sprouts, and quickly return the water to a boil. Cook sprout until just tender then drain sprouts

Steaming
Sprouts can be steamed rapidly in a small amount of water. This will minimize the odors created when Brussels sprouts are cooked too long, and will also minimize nutrient losses. There are two ways that they can be steamed. Sprouts can be added to an inch of already-boiling water or can be placed in a covered vegetable steamer. After steaming for 1–2 minutes, uncover pot for 10–15 seconds to disperse the strong-tasting sulfur compounds. Re-cover pot, and continue cooking sprouts for 5–10 minutes in boiling water or 6–12 minutes in a steamer. Check them periodically by poking them with a fork to test for doneness. Cook them until they are just tender.

Raw
Brussels sprouts can be too strong-flavored and chewy to eat raw, especially if they have been stored for a while. Steam them briefly or blanch them in boiling water, then drain them quickly, dunk them in ice water to keep them from cooking further, and drain again.

Make Brussels Sprouts Part of Your 5 A Day Plan
Blanched Brussels sprouts are a great addition to salads, as snacks, or as part of vegetable trays. Brussels sprouts have a hearty flavor and tend to go better with flavorful foods such as beef, sharp cheeses, or with stronger seasoned foods. They also make a tasty addition to soups, stews, and casseroles.