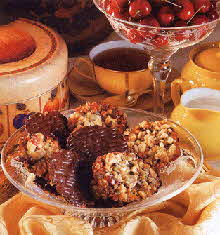 From the Cookbooks of Le Cordon Bleu - By Katrina Boydon

For five hundred years the term ‘cordon bleu’ has been associated with superior cooking and culinary techniques. The name ‘Cordon Bleu’ (meaning blue ribbon) originated with a 16th century French order of knights, L’Ordre du Saint Esprit. The members of the order were dubbed Cordon-Bleus because of the broad blue ribbons on which they wore the cross of the Holy Spirit. They held legendary sumptuous banquets and as a result the term cordon bleu became synonymous with culinary excellence.

If you would like a taste of some of the mouth-watering recipes originating from Le Cordon Bleu you can start here! Each month we will publish a tried and tested recipe from one of the great Le Cordon Bleu publications. You can amaze your family, impress your friends and maybe even inspire yourself to go on and qualify at a Le Cordon Bleu school.

Recipe for Florentines
Accredited to Austrian bakers, but with origins in Italy, Florentines are cookies made from a wonderful mixture of sugar, butter, cream, nuts and fruit. Crisp to eat, they have the added allure of the optional, though traditional, chocolate base.

Chef’s Tip
Florentines make excellent petits fours if made with ½ teaspoon of mixture. They will store in an airtight container for up to one week. Any extra uncooked mixture can be stored in the refrigerator for one week.

Cooking Instructions
1. Melt the butter in a small saucepan, stir in the sugar, slowly bring to a boil and remove from the heat. Add the candied peel, cherries, and the sliced and chopped almonds and mix well. Whisk in the cream until it is thick and gently stir into the warm mixture. Set aside for 10 minutes, or until cool and thick.

2. Using a heaped teaspoon of mixture for each Florentine, spoon on enough mounds of the mixture to fill both prepared baking sheets. Space well apart as the cookies will spread. Bake for 5 minutes, or until lightly set. Using a large cookie cutter or a cup, shape the spread mixture into net rounds by pulling in the edges. Return to the oven for 4 minutes. Reshape with the cutter and allow to cool for 3 minutes, or until firm enough to remove from the tray. Carefully lift them with a flexible bladed knife and cool on a wire rack. Repeat with the remaining mixture on another prepared baking sheet.