Asian pears are cousins to the pears that are typically seen in grocery stores, but this fruit is similar to an apple and its many names reflect that characteristic. Other names that this fruit goes by are: Chinese pear, Japanese pear, Sand, Nashi, and apple pear.

Asian pears differ from the traditional European ones. These pears are usually round, firm to touch when ripe, and are ready to eat after harvest. Asian pears reach prime quality when they ripen on the tree, like an apple and peach. These pears will be crisp, juicy, and slightly sweet with some tartness, especially near the core. 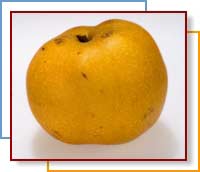 In the United States, the Japanese type of Asian pear called 20th Century or Nijisseki is the most popular. It is easily identified with its round shape and smooth yellow skin. Other common varieties include the Japanese bronze-toned Hosui pear and the pear-shaped Ya Li, a pale-green Chinese variety

Selection
Select the most fragrant and unbruised fruit with little to no brown spots. Ripe Asian pears are hard and do not soften. They are ready to eat when purchased.

Storage
Asian pears are known for keeping well. Store pears a week at room temperature or up to three months in the refrigerator.

Make Asian Pears Part of Your 5 A Day Plan
-Enjoy eating fresh out of hand.
-Use in salads, slaws, soups, and sandwiches.
-Use Asian pears as you would with other pears and apples in cobblers and fruit crisps.
-To prevent discoloration when cut, dip in a mixture of water and lemon juice.

* Percent Daily Values are based on a 2,000 calorie diet.