It was October 21st, 1805.  Napoleon Bonaparte, self-crowned emperor of France was on the precipice of conquering Europe.  In less than two months he would crush the Third Coalition at the Battle of Austerlitz and pave the way for French dominance of the European continent.

But in the Atlantic Ocean off the coast of Cape Trafalgar Spain, the tables were completely turned.  Admiral Horatio Nelson and his Royal Navy fleet of 27 ships virtually obliterated a combined French and Spanish armada of 33 ships.  The French and Spanish lost 22 ships but the British didn’t relinquish a single vessel.  The resoundingly lopsided victory cemented Britain’s control of the seas for the entire Napoleonic era.  It also led to a successful British naval blockade of France in 1807.  The blockade meant France was unable to import goods from the New World, one of which was cane sugar from the Caribbean.  With their supply of sugar cut off the French, (per Napoleon’s decree), turned to beets which yield harvestable amounts of sucrose.  By the end of the Napoleonic era, over 300 mills were in operation in France and other parts of Europe producing sugar from beets.

Beets, or beetroots in Britain, are a round root vegetable.  The most common variety sport a deep, dark red hue but golden, white, and red and white striped colorations also exist.  Beets originated in the Mediterranean region and were consumed by the ancient Greeks and Romans.  However, they didn’t find their way to the Far East until the Middle Ages.  Like countless other foods in the history of man, beets were thought to cure a host of diseases and be an aphrodisiac to boot.  Modern claims purport that beats guard against birth defects, liver disease and have anti-cancer properties.  But, as I’ve highlighted before, everything today either causes or cures cancer.  Granted, beets are nutritious, containing fair amounts of vitamins A and C, as well as folate, potassium, manganese, magnesium and fiber.  The greens are also edible and add calcium and iron to the nutritional portrait.

The red hue of beets arises from a class of pigments called betalains, most specifically betacyanin.  Betacyanin in particular is touted for its cancer fighting abilities.  Interestingly, 10-14% of the population has difficulty metabolizing betacyanin, a condition known as beeturia.  It’s tell tale and disturbing sign is red urine after consuming beets.  Whether beeturians receive the anti-cancer benefits of betacyanin is anybody’s guess.

Beets are available year round.  Choose specimens that are firm, smooth and unblemished.  If the greens are still attached they should be brightly colored and free of wilting.  Like carrots, you should cut the greens off before storing them since they deplete nutrients and moisture from the root.  Beets can be stored in a plastic bag in the fridge for 1-2 weeks.  Leave about an inch of the greens in tact however to reduce bleeding of the color during cooking.  Similarly, it is generally recommended to peel them after cooking to inhibit color and nutrient loss. 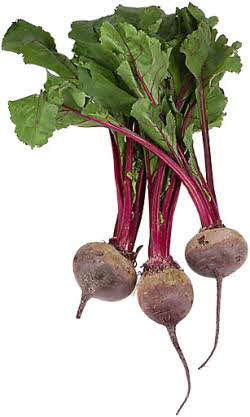 Beets can be roasted, boiled, steamed, and if cut small enough, even sauteed.  Although they can be used raw, even most beet salad recipes call for roasting the beets first.  Roasting imparts a deeper flavor and accentuates their natural sweetness.  To roast beets, wash them, dry them, coat with oil, and then individually wrap them in aluminum foil.  You can roast them without the foil but never skip the oil.  The foil inhibits their moisture loss, a particular concern for large beets which require extended cooking.  Place the beets into a 400 degree oven and then, depending on the nature of your oven, roast for 1 to 1 Â˝ hours or even a little more.  They’re done when you can insert a pairing kinfe into them with little resistance.  Remove them from the oven, allow them to cool, and their skins will slip right off.

In additon to salads, beets can roasted and served on their own.  I like serving them sliced, drizzled with extra olive oil, and lots of salt.  Or you can roast them in combination with other root vegetables.  Beets and carrots make a fine synthesis.  Whether roasted or not, cooked beets can be mixed with all sorts of sauces, glazes, and vinaigrettes to make a unique side dish.  Beet greens are used in salads, pasta dishes, or simply sauteed and served on their own.

And of course, how could we even discuss beets without mentioning the quintessential beet dish:  borscht, (also spelled borsch).  Borscht is a beet soup that originated in Russia and eastern Europe and has become an indelible part of their culinary heritage.  Borscht became popular in France in the 1920’s due to the inlfux of Russian immigrants.  Borscht can be served either hot or cold but the permutations don’t stop there.  There are many different variations of borscht, utilizing different assortments of vegetables, meats, or seasonings with the beets.  Some employ kvass, a Russian beer.  Cold borschts tend to be sweeter and make for great summer fare.  There is one constant in the borscht equation:  always serve borscht with a generous dollop of sour cream.  You can’t beat it!