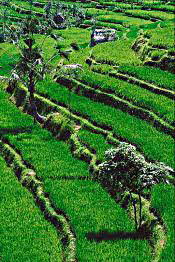 More than 1 billion people throughout the world are actively involved in growing rice.

50% of all the world's rice is eaten within 8 miles of where it is grown.

The secret ingredient that gives ancient Chinese mortar its legendary strength is sticky rice. An analysis of samples from the Ming Dynasty (1368-1644) city wall in Nanjing showed why the rice is such an effective additive to lime mortars. Amylopectin, the rice compound in the mortar, provides mechanical strength and stability, and inhibits the growth of calcium carbonate crystals, resulting in a more compact and resilient binding material. Chinese scientists re-created the mortar and determined that it is ideal for restoring ancient structures.   Archaeology, Sept/Oct 2010

Rice is the main dietary staple for more than 1/2 of the world's population.

Rice was first grown in the U.S. in the Carolinas in the late 1680s with rice that most likely came from Madagascar.

The U.S. exports about half of its rice crop, mostly to Mexico, Central America, Northeast Asia, the Caribbean, and the Middle East.

The United States produces less than 2 percent of the world's rice, but it is a major exporter, accounting for more than 10 percent of the annual volume of global rice trade.
(2009 USDA Economic Research Service)

The major rice producing states are Arkansas, California, Louisiana, Texas, Mississippi and Missouri.  Almost half of the U.S. rice crop is exported to over 100 countries.

There are thousands of different varieties of rice (Oryza sativa). At the International Rice Research Institute Genetic Resources Center in the Philippines, there are 80,000 rice samples in cold storage.

Rice is grown on every continent except Antarctica.

One seed of rice yields more than 3,000 grains. It is the highest yielding cereal grain and can grow in many kinds of environments and soils, which is why it is grown everywhere.
USA Rice Federation www.usarice.com

Rice, millet, and sorghum are though to be the first crops ever cultivated.

Rice has been cultivated for over 5,000 years.

Rice was introduced to Japan sometime before 100 B.C. from China or Korea.

According to Shinto belief, the Emperor of Japan is the living embodiment of the god of the ripened rice plant, Ninigo-no-mikoto.