Watermelons are native to southern Africa, but have been known in India since prehistoric times, and in Egypt for 5-6,000 years.

The first recorded watermelon harvest took place 5,000 years ago in Egypt. Pictures of the fruit were found in paintings on the walls of ancient buildings. From there, the fruit spread to other countries by merchant ships.
Library of Congress Local Legacies Project 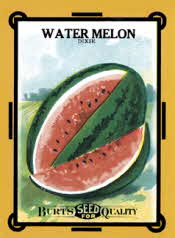 Watermelon is 92% water, and early explorers used watermelons as canteens.

Watermelon was designated as the Official Vegetable of Oklahoma in 2007. (no mistake - it is the state vegetable).

Cordele, Georgia claims to be the Watermelon Capital of the world.

The largest watermelon in 1990 was grown by Bill Carson of Tennessee, weighing 262 pounds.

Richard LeFevre set a world record for eating Watermelon. He ate 11½ pounds in 15 minutes. (this no longer the record).