There are over 400 species of freshwater and saltwater bass.

Giant sea bass also called jewfish, have been recorded with weights of up to 800 pounds. 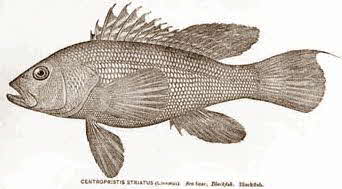 The Striped bass (Morone saxatilis) was designated as the Official Saltwater Fish of Virginia in 2011.

The Small-Mouth Bass (Micropterus dolomieu) was designated as the Official Sport Fish of Tennessee in 2005.

Striped Bass (Morone saxatilis) was designated as the Official Fish of Rhode Island in 2000.

The Guadalupe Bass (Micropterus treculi) was designated as the Official Fish of Texas in 1989.

• Mississippi designated the Largemouth or Black Bass (Micropterus salmoides) as its Official State Fish in 1974.

The Striped Bass (Morone saxatilis) was designated as the Official Fish of South Carolina in 1972.

The Channel Bass or Red Drum (Sciaenops ocellatus) was designated as the Official Saltwater Fish of North Carolina in 1971.

• The largemouth bass is the official State Freshwater Fish of Alabama.

• The official state fish of Georgia is the largemouth bass.

Bass is the common name for many varieties of fish in various families. Local names for various bass include black bass, white bass, rock bass, largemouth bass, etc. There are both freshwater and saltwater bass.  They range in size from the 7 foot, 500 pound sea bass, down to species that are no more than 4 inches long.

Largemouth bass have been recorded over 22 pounds and over 32 inches long.

Largemouth bass are considered the most popular gamefish in the U.S.

The largest recorded striped bass weighed 125 pounds and was caught off the North Carolina coast in 1891.