In western Cyprus, a mud-plaster structure found at the site of Kissonerga-Skalia appears to have been used as a Bronze Age kiln to dry malt for brewing beer. Archaeologist Lindy Crewe of the University of Manchester in England and her team excavated the nearly 4,000-year-old oven, uncovering ashy deposits containing carbonized fig seeds, mortars and other grinding implements, and juglets. They also found sherds of a large clay pot that they believe was a pithos, a vessel in which a fire was lit and used as an indirect heat source within the kiln. Malt, the team hypothesizes, might have been stored in the juglets while they were in the kiln, and then removed to perform the rest of the brewing process.
(2013 Archaeology Magazine)

The oldest known beer residue and brewing facilities date to 5,500 years ago in the Middle East.

According to the Beer Institute, beer represents about 1.4% of the U.S. gross national product. (2008)

In 1935 Krueger Brewing became the first brewery to sell beer in cans. The cans were made of steel and the can itself weighed in at 4 ounces!

Why beer is better than wine: Human feet are conspicuously absent from beer making.

Duke Wilhelm IV of Bavaria decreed in 1516 that beer could only be brewed from barley malt, hops and water. This Rheinheitsgebot (purity law) was the world's first consumer protection law.

The oldest known code of laws is the Code of Hammurabi from ancient Babylonia, about 1750 B.C. It regulated the practices of drinking houses, and called for the death penalty for proprietors found guilty of watering down their beer. 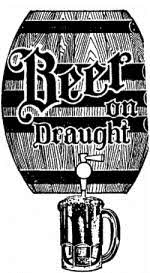 At the 1893 Chicago Fair, Pabst beer won a blue ribbon, and was called 'Pabst Blue Ribbon" beer from then on.

Ale is the primary style of beer consumed in England. Lager beer is the dominant beer style throughout the rest of the brewing world.

Beer was first sold in bottles in 1869 by English brewer Francis Manning-Needham.

Pilsner Urquell, the original pilsner, still uses the same recipe and brewing process today as when the beer was first invented in 1842.
The Czechs know a thing or two about beer -- the Czech Republic has the largest beer consumption per capita in the world. They consume at a level that is almost double the yearly consumption level of the United States.

Pilsner Urquell was the number one import beer in the U.S. before Prohibition.

In a Czech beer house, the bartender will refill your glass every time you empty it – until you place your coaster on top of your glass, signaling that you have had enough.

Beer is defined as a staple food in Bavaria.

In 1935 a method for lining tin cans with vinyl plastic was developed for use with canned beers.

The ancient Babylonians were making more than a dozen different varieties of beer from various grains and honey in 4000 B.C.

The Egyptians believed that the god of agriculture, Osiris, taught humans how to make beer. 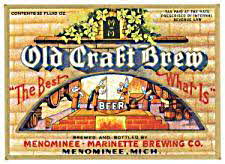 Historians report that during the Middle Ages, when monks were brewing their beer in their monasteries, each monk was allowed to drink 5 quarts of beer a day.

Supposedly the oldest known written recipe is for beer.

One of the reasons the Pilgrims landed at Plymouth Rock in 1620, rather than sail further south to warmer climate, was because their supplies were dwindling, "especially our beere."

According to the Census Bureau, U.S. per capita beer consumption in 2004 was 21.6 gallons.

The largest brewery in the U.S. is the Anheuser-Busch brewery in St. Louis, Missouri.

Lager is a bottom fermented, lightly hoped beer originally brewed in Germany, lager is aged under refrigeration for 6 weeks to 6 months (lager is German for storehouse). Most lagers are fairly light in color, highly carbonated with a medium hop flavor. The original German lager was dark in color.

The people at Guinness, Ireland’s most famous brewery, estimate that in Great Britain alone, 92,749 litres of beer each year are lost in beer drinker’s moustaches and beards. They estimate that each pint (approx. ½ l) is raised 10 times, and each time, 0.56 ml is absorbed into the facial hair.

Molson Companies Ltd., Montreal, Quebec, is the oldest brewery in North America. The company was founded by John Molson in 1786, and is still under Molson family control.

* Peter Minuit (1580-1638) established the first public brewery in America at the Market Field in lower Manhattan.

* The first brewery in America was built in Hoboken, New Jersey in 1642.