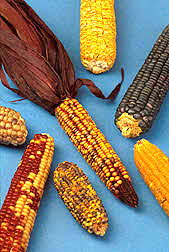 Fresh corn on the cob will lose up to 40% of its sugar content after 6 hours of room temperature storage. The sugar is converted to starch.

Corn Belt - The area of the United States where corn is a principal cash crop, including Iowa, Indiana, most of Illinois, and parts of Kansas, Missouri, Nebraska, South Dakota, Minnesota, Ohio, and Wisconsin.
- The official grain of Wisconsin is corn.
- Nebraska is the 'Cornhusker State.'
- Washington, Missouri, is known as the Corn Cob Pipe Capital of the World.

• An average ear of corn has 800 kernels, arranged in 16 rows.
• There is one piece of silk for each kernel.
• A bushel of corn contains about 27,000 kernels.
• Each tassel on a corn plant releases as many as 5 million grains of pollen.
• Corn is an ingredient in more than 3,500 grocery products.
• One bushel of corn can make 33 pounds of sweetener, 32 pounds of starch, or 2 1/2 gallons of ethanol fuel.
• Corn is the 3rd most important food crop of the world measured by production volume, behind wheat and rice. In terms of acreage planted, it is second only to wheat.

2012 - Corn was domesticated about 10,000 years ago, most likely from a lost ancestor from the highlands of central Mexico. The oldest remains of corn found at archaeological sites in Mexico resemble popcorn type corn. 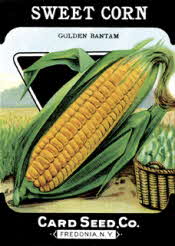 2006 - Ancient inhabitants of the Andes had more culinary options than previously thought.  Evidence for corn processing at a 4,000 year old house on the western Andean slopes, pushed back the date for the earliest cultivation of maize in Peru by 1,000 years.     (Archaeology magazine; May-June, 2006)

The world record for eating corn on the cob is 33 1/2 ears in 12 minutes, held by Cookie Jarvis.  See also: Food Eating Contests

According to Larousse Gastronomique, here in American we serve boiled or grilled corn on the cob with "redcurrant jelly or maple syrup".

Mitchell, South Dakota is the home of the world's only Corn Palace. (The Corn Palace Festival is in August each year).
Built in 1892 in Mitchell, South Dakota, the Corn Palace was created to dramatically display the products of the harvest of South Dakota's farmers, in murals on the outside of the building. The murals are made from thousands of bushels of corn and other grains and grasses such as wild oats, rye, straw, and wheat. Each year these corn decorations are completely stripped down and entirely new murals are created. The Corn Palace is a great tourist attraction and a meeting place for the community. Many events are held here and the most popular is the Corn Palace Stampede Rodeo. But the horses must be watched carefully so they don't eat the building!
Library of Congress Local Legacies Project