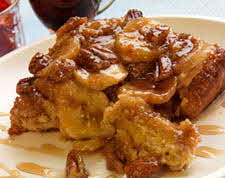 Recipe Below
August 2009, Luverne, Ala. – Sister Schubert’s Homemade Rolls has awarded the grand  prize in its On a Roll Recipe Contest to Nadine Mesch of Mt. Healthy,  Ohio. Her Upside Down Banana Pecan French Toast recipe rolled to the  top of more than 1,300 other entries to win a suite of new Frigidaire  Professional Series kitchen appliances.

The On a Roll Recipe Contest sought original recipes made with any  variety of Sister Schubert’s Homemade Rolls. More than 1,300 entries  from all over the country were submitted between March 1 and May 31,  2009.

“It was a real challenge to choose a winner from so many outstanding  entries, but this is truly the most mouthwatering French toast I have  ever tasted,” said company founder Patricia 'Sister Schubert' Barnes,  who led the judging panel that evaluated recipes based on taste,  simplicity and appearance.

“All of the winning recipes are quick, easy and delicious,” she said. “We focused on simple recipes to create more ways for time-strapped  families to enjoy a home-cooked dinner, snack or dessert together.”

In addition to the overall winner, the best recipe in each of four  categories won a $1,000 first prize. Categories, recipes and winners  include:

All four of the Winning Recipes are featured on the www.sisterschuberts.com Web site along with recipes from Mrs. Barnes’ own collection.


Preparation
Butter bottom and sides of a 9 x 13 inch baking dish. Slice rolls in half and set aside.

In mixing bowl, combine sugar, butter and corn syrup and mix until smooth. Spread mixture into an even layer in bottom of prepared baking dish. Slice bananas thinly and place over brown sugar mixture. Scatter pecans over bananas. Place sliced rolls atop and sprinkle with cinnamon.

In a large mixing bowl, whisk together eggs, half and half and vanilla, and pour over rolls.

Preheat oven to 350 degrees. Bake 45 to 55 minutes or until golden. Cool slightly, run a knife around the edge of pan to loosen sides and carefully invert pan onto a large platter or slice and serve.