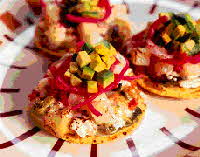 1. Bring a medium saucepan of salted water to a boil and cook potatoes until just tender, about six to eight minutes.

2. Drain, pat dry, and spread in a single layer on a tray to cool.

3. Heat oil in a large skillet over medium heat. Sauté onions with salt and pepper until they begin to brown, about 10 minutes.

5. Pour in heavy cream, bring to a boil and reduce to a simmer. Cook four minutes or until cream begins to thicken.

6. Add cheeses and potatoes, stirring occasionally, until just heated through. Remove from heat.

8. Toast tortillas in a nonstick pan over moderate heat, about one minute per side. Cover toasted tortillas to keep them warm until use.

Instructions:
1. Place onions in a medium saucepan and add water to cover.
2. Bring to a boil, remove from heat, drain and set onions aside.
3. Combine remaining ingredients in the saucepan. Bring to a boil, reduce to a simmer and cook 10 minutes.
4. Add onions and simmer an additional 10 minutes.
5. Transfer mixture to a container, cover and refrigerate at least a day before serving.

Please feel free to link to any pages of FoodReference.com from your website.  For permission to use any of this content please E-mail: [email protected]
All contents are copyright © 1990 - 2020 James T. Ehler and www.FoodReference.com unless otherwise noted.
All rights reserved.  You may copy and use portions of this website for non-commercial, personal use only.  Any other use of these materials without prior written authorization is not very nice and violates the copyright.
Please take the time to request permission.