Yellow onions make up more than 75% of the worlds production of onions. 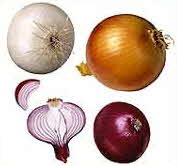 The U.S. per capita consumption of onions is around 18.7 pounds per year. This translates to approximately 370 semi-truck loads of onions used in the United States each day.   (National Onion Association)

The onion is believed to have originated in Asia, though it is likely that onions may have been growing wild on every continent. Dating back to 3500 BC, onions were one of the few foods that did not spoil during the winter months. Our ancestors must have recognized the vegetable's durability and began growing onions for food.
The onion became more than just food after arriving in Egypt. The ancient Egyptians worshipped the onion, believing that its spherical shape and concentric rings symbolized eternity. Of all the vegetables that had their images created from precious metals by Egyptian artists, only the onion was made out of gold.
Today, onions are used in a variety of dishes and rank sixth among the world's leading vegetable crops. CDC.gov

Maui Onions are golden yellow, sweet, juicy onions grown on the Island of Maui, Hawaii. They are very sweet, have a high water content, and usually weigh about 1/2 to 3/4 pound. Maui onions are usually shaped like a flattened golbe. They are the earliest sweet onions on the market, and are generally available from April to June.  Excellent for onion rings.

According to an old English Rhyme, the thickness of an onion skin can help predict the severity of the winter. Thin skins mean a mild winter is coming while thick skins indicate a rough winter ahead.

If you eat onions you can get rid of onion breath by eating parsley.

During the American Civil War, General Ulysses S. Grant sent a telegram to the War Department, "I will not move my army without onions." The next day he got them.

In Blue Hill, Nebraska, no female wearing a “hat that would scare a timid person” can be seen eating onions in public.

According to the Guinness Book of World Records, the largest onion ever grown weighed 10 lbs 14 oz and was grown by V. Throup of Silsden, England.