VICTOR, ID -- Grand Teton Brewing Company, known throughout the West for their exceptional microbrews, will release Double Vision Doppelbock February 15th, the first in their 2009 “Cellar Reserve” series of specialty beers. The 2009 Cellar Reserve beers are dedicated to, and brewed in strict adherence to the Reinheitsgebot, the 1516 Bavarian beer purity law.  Each beer this year will be brewed to commemorate one of the four true beer ingredients: malt, hops, yeast and water. 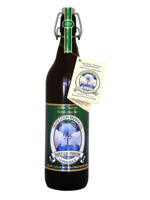 Double Vision Doppelbock was brewed to highlight the brewery’s wonderful water. Like all the great traditional brewing towns, our home, Victor, Idaho, is in or near some of the world’s best barley- and hop-growing regions, and is distinguished by an ample supply of top-quality water.

Our Double Vision Doppelbock is brewed with Idaho 2-Row Pale and German Munich, CaraAroma, CaraMunich and de-husked Carafa malts to an original gravity of 24 Plato (1.096 SG).  The malts provide a dark leather color with ruby notes, a luxurious tan head, and a bready aroma with a hint of smoke.  It is lightly spiced with Liberty hops, an American version of the noble German Hallertau Mittelfruh, and fermented with lager yeast from a monastery brewery near Munich.  In the traditional manner, Double Vision is fermented cold (48 F) and lagered a full 10 weeks for smoothness.  At over 8% alcohol by volume, it is a deceptively drinkable springtime warmer.

The 17th century Paulist monks of Munich were allowed no solid food during their twice-yearly fasts.  They brewed an especially nourishing strong dark lager they called “liquid bread” and named “Holy Father” to help them through the Lenten and Advent fasts. The beer was known as a doppelbock, which signifies a strong lager.  Since “bock” also means “billy goat” in German, these beers are often decorated with images of gallivanting goats.  Our Double Vision label features two goats in front of a waterfall—a reminder of the importance of water to the development of the style as well as the taste of this strong lager.

The Cellar Reserve series of beers are unique, different even from other craft beers.  Grand Teton’s Cellar Reserves are brewed with specialty hops and malts and unique strains of yeast.  Most ales and lagers are produced in 2-4 weeks. However, 3 to 8 months are spent on each of the Cellar Reserve specialty brews.  They are also bottle and cask-conditioned, which produces natural carbonation and will blend and smooth the flavors with age.  These beers have a long shelf life and don’t have to be rapidly consumed.  Proper aging of these bottles creates beers to be cherished.

The Double Vision Doppelbock will be available February 15th at select locations in Idaho, Wyoming, Colorado, California, Oregon, Montana, Washington, New York, Arizona, Wisconsin, Minnesota and Kansas!  Call the brewery at 1-888-899-1656 for information and availability on this exciting new product.