Jeff Bell Announced as 2013 United States Bartender of the Year

(June 2013)
Thousands of applications were submitted. Hundreds of cocktail recipes were created. The nation’s top mixologists competed and five internationally recognized cocktail luminaries assembled to select one bartender worthy of the title of U.S. Bartender of the Year. After proving his skills during five challenges and two days of competition, the United States Bartender’s Guild (USBG) and Diageo World Class are proud to announce Jeff Bell as the 2013 U.S. Bartender of the Year. 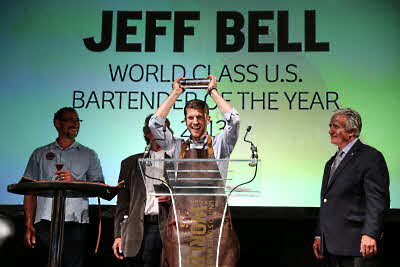 In an unprecedented turn of events, two finalists scored equally in the competition. Jeff Bell of New York, NY and Julio Cabrera of Miami, FL tied for first place. Since the United States can send only one mixologist to the Global Finale, Jeff and Julio competed live in a “Shake Off” at the winner’s ceremony to the delight of the crowd. The competitors only had seven minutes to prepare their “perfect serve” cocktails for the five judges.  After thorough deliberation Jeff was declared the winner and will represent the U.S. at the Global Finale this July. Diageo World Class remains the largest international cocktail education program and fosters a community of bartending talent that continues to elevate the art of the cocktail across the world.

“I want to thank Julio, he is an exceptional mixologist that truly deserves all the recognition in the world. I am so excited to be a part of this unbelievable program and to represent the U.S. in the Global Finale,” said Jeff.  “The USBG and Diageo World Class program is an experience that elevates the art of the cocktail by pushing the limits of mixology as we proved last night. I am truly honored to be among the twenty finalists and extremely humbled that the cocktail luminaries chose my skills to represent the United States in the global competition.”

Jeff’s journey began in January 2013, as the USBG and Diageo World Class program entered its second year in the Unites States. The program invited top bartending and mixology talent to prove their skills by completing three educational modules, submitting an original cocktail recipe and creating a video about their passion for their profession. Hundreds of hopefuls completed the application, which was judged by the reigning 2012 USBG and Diageo World Class U.S. Winner, Ricky Gomez, and the Tanqueray Global Ambassador, Angus Winchester. In the end, the twenty finalists were selected to travel and prove their skills in one of the major urban epicenters of American cocktail culture, New York City.

The twenty competitors arrived in New York City to put their talent to the test from June 3-4, 2013. The challengers demonstrated their expertise, knowledge and technique by creating cocktails featuring one of the Diageo Reserve brands including Bulleit Bourbon, CIROC Vodka, Johnnie Walker Blended Scotch Whisky, Ketel One Vodka, Tanqueray No. Ten, Tequila Don Julio and Zacapa Rum.

As a reprise to the United States’ inaugural competition, challengers once again competed in the program’s traditional “Retro Chic,” “Food Pairing” and “Ritual Theater” challenges. However, this year, competitors also showed their skills with two new tests including “Brand Mastery,” a written exam and blind taste test for competitors to prove their palates and spirits knowledge, and “Cocktails Against the Clock,” an intense timed challenge that tested the finalists’ poise, accuracy and craftsmanship under pressure. Throughout the two-day competition, internationally acclaimed cocktail luminaries including master mixologist, Tony Abou-Ganim; beverage expert, Steve Olson; award-winning bartender, Jim Meehan; James Beard Nominee, Julie Reiner; and National President of the USBG, Dave Nepove carefully critiqued and scored each drink to determine the competitor deserving of the USBG and Diageo World Class U.S. Bartender of the Year.

“We are thrilled with the expansion of this program and are amazed by the talent showcased in the second year of USBG and Diageo World Class U.S.,” said Mark Schulte, Senior Vice President Customer Marketing of Diageo North America. “Jeff will make the United States mixology community extremely proud when he represents our country at the international competition on board the Azamara Club Cruise ship. His knowledge, creativity and passion for the principles of the American cocktail culture will truly stand out when competing against a worldwide assembly of bartenders and celebrating with World Class responsibly.”

Jeff will travel aboard the luxury Azamara Club Cruise ship from July 4-10 to compete against forty-nine worldwide bartenders. The challenges will take place while sailing along the Mediterranean coastline with stops in Nice, Monte Carlo, St. Tropez, Ibiza and Barcelona.  While aboard, he will be judged by renowned international cocktail luminaries, while vying for the chance to win the global title of “Diageo World Class Bartender of the Year.”

For additional information about the program and for upcoming competitions, visit www.DiageoWorldClassUSA.com

About USBG
The USBG is the largest network of professional bartenders in the U.S. who come together to share the craft of mixology. With over 60 years of presence in the United States and International coverage in affiliation with the International Bartender's Association (IBA) in over 50 countries, the United States Bartenders' Guild is setting the standard for the profession throughout the country. With the resurgence and increasing popularity of the cocktail, there is a high demand for creative and professional bartenders. As an industry leader, the USBG is responsible for educating its members about current trends while encouraging them to start new ones. For more information, visit www.usbg.org.

For our global resource that promotes responsible drinking through the sharing of best practice tools, information and initiatives, visit www.DRINKiQ.com