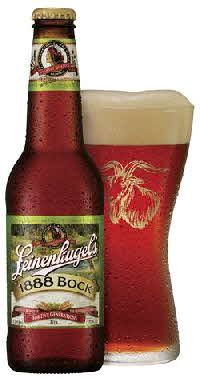 Available January through March, Leinenkugel’s 1888 Bock features a robust head which seizes the rich aroma of toasted and caramel malts. The flavor of this full-bodied brew is heavily defined by the Munich malts and the 20 to 25-day cold lagering process which creates a smooth, toasted malt flavor. Leinenkugel’s 1888 Bock also features Caramel, Pale and two-row Chocolate malts while Cluster hops add a touch of citrus character.

“We’re delighted to tap Leinenkugel’s storied brewing history to produce 1888 Bock and continue to invigorate our portfolio,” says Jake Leinenkugel, fifth generation brewer and president of the Jacob Leinenkugel Brewing Company, who notes that 1888 Bock is being released on the heels of the new holiday seasonal Fireside Nut Brown. “Our loyal fans have told us they’re looking for adventurous new craft beers to enjoy throughout the seasons and new 1888 Bock delivers.”

In the spring of 1888, after 21 years of brewing in Chippewa Falls and one of the harshest winters anyone in the Midwest could remember, the then Jacob Leinenkugel Spring Brewery staff realized Leinie fans were primed for the brand’s first seasonal brew. So, they produced a hearty bock beer, a style that rose to popularity as a source of sustenance for monks during the Lenten fasting season and can be traced back to14th century Germany.

Brewed in small, high-quality batches at Leinenkugel’s brewery in Chippewa Falls, Wis., 1888 Bock is the perfect complement for foods with big flavors such as roasted and game meats as well as strong cheese such as Gruyere, Swiss and aged Cheddar.