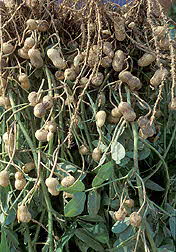 Boiled Peanuts were designated as the Official Snack Food of South Carolina in 2006.

The peanut (Arachis hypogaea) is actually not really a nut - it is a legume, the same family as beans and peas.

Peanuts originated in South America, where they were cultivated by Indians for at least 2000 years. As early as 1500 B.C., the Incans of Peru used peanuts as sacrificial offerings and entombed them with their mummies to aid in the spirit life.

Chocolate manufacturers use 20% of the worlds peanuts (2008).

Though there are several varieties of peanut, the two most popular are the Virginia and the Spanish peanut. The Virginia peanut is larger and more oval in shape than the smaller, rounder Spanish peanut.  Unshelled peanuts should have clean, unbroken shells and should not rattle when shaken.

Dr. George Washington Carver researched and developed more than 300 uses for peanuts in the early 1900s; Dr. Carver is considered "The Father of the Peanut Industry" because of his extensive research and selfless dedication to promoting peanut production and products.

Adrian Finch of Australia holds the Guinness World Record for peanut throwing, launching a peanut 111 feet and 10 inches in 1999 to claim the record.

The U.S. produces only about 6% of the world crop.

In the U.S., annual peanut production (about 1.5 million tons per year) often exceeds the production of beans and peas combined.

India & China together produce almost 2/3rds of the world crop.

Historically, the largest producer of peanuts in the world was India, but production in China overtook Indian production in the mid-1990s.  For the period 1996 to 2000, China produced almost 40% of the world crop, and India almost 25%, with the U.S. in 3rd place with almost 6%

Worldwide, about 2/3rds of the peanut crop is processed for peanut oil.

20%  of the world's peanut production is used in candy.

Peanut oil accounts for 8% of the worlds edible oil production.

Americans eat 3 pounds of peanut butter per person every year. That's about 700 million pounds, or enough to coat the floor of the Grand Canyon!

One acre of peanuts will make 30,000 peanut butter sandwiches.

One acre of peanut plants yields about 2,860 pounds of peanuts.

Two peanut farmers have been elected President of the United States: Thomas Jefferson and Jimmy Carter.

Peanuts are members of the pea family.

The official state crop of Georgia is the peanut. Georgia produces almost 1/2 of the total U.S. peanut crop.  More than 50% of the crop goes to peanut butter production (2002).

Georgia is the largest producer of peanuts in the U.S.

The first peanuts grown in the United States were grown in Virginia.

Mr. Peanut was created by 13 year-old Antonio Gentile in a logo contest held by Planters in 1916.  He won the grand prize of $5.00.  His drawing of a peanut person with arms and crossed legs was refined by a professional illustrator who added the top hat, monocle, white gloves and cane.

What is supposedly the World's Largest Peanut is in Turner County. A 20 foot tall peanut, it is a monument to the importance of the peanut in Georgia history.