"Cool as a cucumber" isn't just a catchy phrase. The inner temperature of a cucumber can be up to 20 degrees cooler than the outside air. No wonder these are such a summertime favorite!

Cucumbers were believed to have originated in India and spread through Greece and Italy. They made their way into North America agriculture by the mid-16 century. Cool and moist due to their high water content. "Cukes" belong to the same family as pumpkins, zucchini, watermelon and other squashes.

Varieties
There are several varieties of cucumber; the most popular are English, Persian, and Pickling cucumbers. All these varieties are available year round. 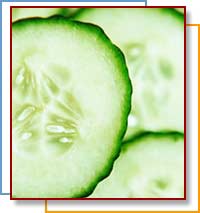 Persian cucumbers are also known as regular cucumbers with soft, edible seeds. The skin is often waxed to seal in moisture.

English cucumbers are sometimes known as gourmet cucumbers, "burpless", or seedless cucumbers. This variety has seeds that are very small but do not need to be removed. Longer and thinner than regular cucumbers this variety is usually shrink-wrapped to seal in moisture because they are not waxed.

Selection
It’s important to look for firm cucumbers with rich green color and no soft spots. Cucumbers that bulge in the middle, usually most likely means its filled with large watery seeds and tasteless flesh.

Storage
Whole cucumbers should be refrigerated in a crisper for up to a week. Unwaxed cucumbers will easily lose moisture so keep them wrapped tightly in plastic.

Uses & Preparation
Wash; removing seeds and peeling depends on the variety and is optional. To seed, slice in half lengthwise and scrape out with the tip of a teaspoon.
Add a decorative touch to your veggie platter. Run tines of a fork down the entire length of the cucumber, penetrating the peel. Slice crosswise.

Make Cucumbers Part of Your 5 A Day Plan