An estimated 2000 participants took part in several dozen cooking demonstrations, wine seminars, specialty-food tastings, receptions and guest chef dinners during the 2009 Epicurean Classic, held August 28-30 along the bluff in downtown St. Joseph, MI. After six successful years and the recent addition of KitchenAid as Presenting Sponsor, the event is considered the Great Lakes’ premier culinary celebration. Based in the St. Joseph area, KitchenAid is celebrating its 90th year in 2009. 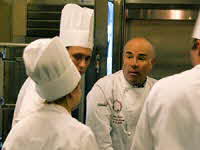 One of the neatest parts about this event is that the students of the Great Lakes Culinary Institute work with the chefs to support their classes and prepare food for the receptions.                   *photo

The Epicurean Classic was created as a vehicle for chefs to share expert cooking technique, food knowledge, and coveted recipes from their latest cookbooks in a casual and relaxed, yet educational and informational setting. Attendees sit just a few feet away from the cooking stages, near enough to smell the dishes being prepared. All the participating guest chefs encourage questions at any point during their hour-long presentations followed by a book-signing session. Dressler notes, “You won’t find that type of accessibility at the larger festivals around the country and we realize that’s part of our appeal for both the audience and the chefs.” 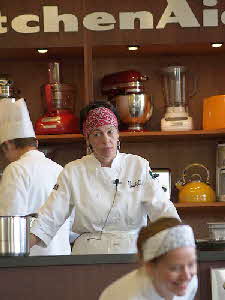 Over 30 different books were available for sale at the onsite bookstore this year – many of which sold out by the end of the three-day event. Upwards of 1500 books were sold. One of the most popular titles was Brunch by network TV and Chicago native Gale Gand. Forty-eight copies sold during the first few hours on Friday and another 48 copies were over-nighted in and gone by the end of the day on Saturday.

Jennifer McLagan, author of the 2009 James Beard Cookbook of the Year, FAT: An Appreciation of a Misunderstood Ingredient, with Recipes,  was one of the culinary artisans who also participated in a previous year. “The Epicurean Classic is a great event. Not only do you get to meet people genuinely interested in food, but best of all, other cookbook authors,” Jennifer wrote on her blog after returning to her home in Canada.

“Although [my] new book was not yet supposed to be available in late August, I agreed to do the first major event which was the Epicurean Classic, held for the first time in St. Joseph, Michigan,” Rose Levy Beranbaum wrote on her website. “By some miracle, 40 books arrived early and in time for the event!”

James Hills, a marketing consultant and freelance travel blogger from Chicago, was one attendee to comment on the Epicurean Classic page on Facebook. “Ted Reader’s presentation blew me away…that is one guy I look forward to seeing again in the future.”

Reader, who participated in Epicurean Classic twice when it was held in Traverse City, MI, was pleased to be part of the event. “The event was rocking off the charts,” he said. “The fact that KitchenAid has come on board in such a strong manner is wonderful. I love this event…love the location…love the set up of the four cooking tents and the reception tents. First class, all the way…absolutely delicious!”

Epicurean Classic will be held August 27-29, 2010, both up along the bluff and in the newly constructed beachside pavilion and amphitheater, in downtown St. Joseph. Guest artisans and demonstration schedules will be posted online in early spring at www.EpicureanClassic.com.