Event Profile
Oil China, as the only professional international exhibition of olive oil and edible oil in China, offers the most direct and efficient platform for producers, exporters, importers, distributors, dealers, and agents to meet each other and expand business in China. So far, Oil China has become the first choice for exporters to enter the Chinese market. It has attracted more than 1,000 exhibitors & Country Pavilions and 50,000 visitors all over the world. Building on the success of previous five editions of Oil China, A series of activities have been devised for Oil China 2010: 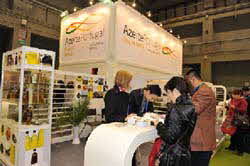 China is increasingly becoming the focus of attention of the whole world. According to the data from the customs and the forecast of related organizations, From 2002 to 2008, Chinese edible oil consumption kept an annual growth rate of 8%. If this trend continues, in 2010 the consumption volume of edible oil will reach 29,000,000 ton, and the proportion of imported edible oil is rising rapidly at about 20%-50% per year.

It is forecasted that in 2015 the consumption volume of edible oil will reach 30,000,000 ton and the average per person consumption volume will also reach 20 kg (in 2008 15 kg per person). Over 60% of the above-mentioned edible oil will completely rely on import ecause of the decrease of farm land and the limited yield of oil crops. In a word, the huge market of China is open for you and it is time to expand your business to China.

As one of the food with nutrition value, olive oil is more and more popular in China. At present more than 200 brands of olive oil can be found in Chinese olive oil market, among which nearly 100% are imported from Spain, Greece, Italy, Turkey, Tunis, Portugal, Jordan, Australia, etc. The main consumption cities of olive oil are Beijing, Shanghai, Shenzhen, Guangzhou, Tianjin and other large and middle cities. According to the following graph, since 2004 the average proportion of imported olive oil has been keeping the increase of nearly 60% per year. With the same rate, by 2010 the volume of imported olive oil will be over 25,000 tons. Along with the improvement of the living standard of Chinese people and the health consciousness, olive oil will have great potential in Chinese edible oil market.