On April 7th, brewers, beer importers, distributors and beer lovers across America will celebrate 75 years of beer that has been flowing legally since the drought of Prohibition.  The date will be marked with specially brewed commemorative beers, brewery tours and events at many of America’s 1,400 plus breweries. 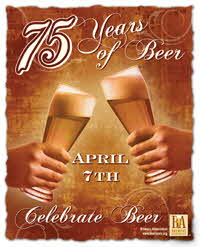 Historians note that Prohibition officially ended on December 5, 1933, with the ratification of the 21st Amendment.  But earlier that year, newly-elected President Franklin D. Roosevelt took steps to fulfill his campaign promise to end the national ban on alcohol.  He spurred Congress to modify the Volstead Act to allow the sale of 3.2 percent beer in advance of Prohibition’s ratification.  Thus on April 7, 1933, Roosevelt himself received newly legalized beer at the White House to toast what was the beginning of the end for Prohibition.  In the 24-hours that followed, more than 1.5 million gallons of beer flowed as Americans celebrated.

“April 7th is a day to recognize the past 75 years of beer and the beer community’s contribution to American's quality of life. The explosion of creativity and innovation by those who make beer is an American success story,” said Charlie Papazian, President of the Brewers Association.

“As we celebrate this significant day in the history of beer, we also recognize the incredible contributions beer has made to our nation and the economy over the last 75 years,” added Jeff Becker, President of the Beer Institute. “Today, our industry contributes nearly $190 billion annually to the U.S. economy and provides more than 1.7 million jobs to our nation’s workforce.”

“April 7th is the perfect time to highlight the entrepreneurial spirit and economic contributions America’s beer industry brings to our country. Americans now have access to nearly 13,000 labels of beer – within the safest alcohol distribution system in the world - because of the state-based regulatory system that was established 75 years ago,” added Craig Purser, president of the National Beer Wholesalers Association (NBWA).

To mark this special anniversary, breweries across the country will hold ‘75 Years of Beer’ events for all consumers, employees, and their families. Numerous breweries are planning 75th anniversary celebrations including: dedicated festivals, special cask pre-prohibition beers, viewing parties of the historical documentary “The American Brew” – a film commissioned by “Here’s To Beer”, brewery tours, scheduled toasts and more.

For more information and a list of brewery celebrations by state please visit:  www.75YearsofBeer.org