There are at least 10,000 varieties of tomatoes.

One pound of tomato seeds will produce about 140,000 tomato plants.

The key ingredient in 78% of Americans favorite recipes is tomatoes. 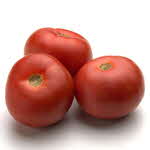 In 1893, the United States Supreme Court ruled, for the purpose of levying a tariff, that the tomato was a vegetable. The Tariff Act of 1883 levied a tax on imported vegetables, but not on fruits. The Court ruled that even though the tomato was botanically a fruit, it was a vegetable in function and common usage. (A previous case in 1889 had ruled that even though beans are botanically seeds, in common use they are vegetables.)

China is the largest producer of tomatoes in the world, producing over 16% of all tomatoes.

The first tomato plants were planted in Greece by a Friar Francis in 1818, in the gardens of a Capuchin monastery at the Choragic Monument of Lysicrates (built in 335 B.C.) in Athens. 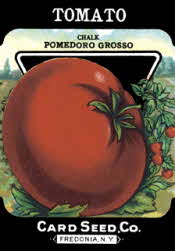 Supposedly Ronald Reagan didn't eat a tomato for 70 years. His dislike of tomatoes sprang from a childhood prank. He had been given what he thought was an apple, but when he took a bite realized it was a tomato.

The smallest species of tomatoes are less than three-quarters of an inch in diameter. There are both red and yellow varieties.

The highest concentration of vitamin C in tomatoes is in the jelly-like substance around the seeds.

Tomatoes are a natural source of the antioxidant 'lycopene', which may help prevent heart disease.  According to scientists, more lycopene is absorbed by the body from cooked tomatoes than from fresh tomatoes.  1/2 cup of canned tomatoes delivers more than 3 times the lycopene as found in one medium raw tomato.

• The Tomato was named the Official Fruit of Ohio in 2009.

• The Tomato (Lycopersicon lycopersicum) was designated as the Official Fruit of Tennessee in 2003.

• In 2003, Louisiana designated the Creole Tomato as the official State Vegetable Plant.

• The tomato is also the official state Vegetable of New Jersey.