In 2011 the U.S. supply of movable honeybee hives is a little more than 2 million hives. That is only half of the number of movable hives available in the mid 1940s, yet the total acreage of plants needing pollination has almost doubled in the same time.          (Science News: April 9, 2011) 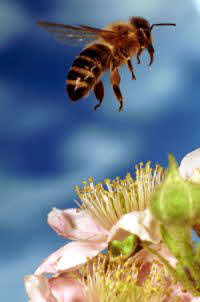 In 2009 The U.S. per capita consumption of honey was around 1.1 pounds per year.

An apiary dating from the 10th century BC has been discovered in northern Israel. (2009)

About 1/3 of all honeybee colonies in the U.S. perished during 2007 due to several deadly viruses (collectively called Colony Collapse Disorder). Little is understood about the reasons this problem has become so severe.

In ancient Egypt, citizens paid their taxes with honey.

There are 211,600 beekeepers and 2.63 million colonies of honeybees, which produce more than 220 million pounds of honey each year in the United States.

A single hive of honeybees may contain as many as 80,000 bees.

Honey was most likely the first sweet 'treat' that humans discovered.

It takes about 2 million flower visits by honeybees to produce 1 pound of honey.

The popular and varied uses of honey as a medicine in ancient Egypt can be seen in Egyptian medical texts dating back to about 2,500 B.C.  In these texts, honey is listed in hundreds of remedies.

Since honey has the ability to absorb and retain moisture, it is used in the baking industry to keep baked goods fresh and moist.

Never give honey to infants under 1 year old, as honey may contain Clostridium botulinum spores to which infants have very little resistance. Once ingested, these spores may germinate and release deadly toxins.  Once infants are a year or so old, they have developed some resistance to botulinum spores.

In the 16th century, Conquering Spaniards found that the natives of Mexico and Central America had already developed beekeeping. A distinct family of stingless bees (not true honey bees) was native to these regions.

European settlers introduced European honey bees to New England in about 1638. North American natives called these honey bees the "white man's flies." Honey was used to prepare food and beverages, to make cement, to preserve fruits, to concoct furniture paste-polish and varnish and for medicinal purposes.

The U.S. Department of Agriculture has estimated that there are between 139,600 and 212,000 beekeepers in the United States (2003).  The vast majority (95%) are hobbyists with less than 25 hives.  In addition, about 4% are part-timers who keep from 25 to 299 hives.  Together, hobbyists and part-timers account for about 50 percent of bee colonies and about 40 percent of honey produced.  The number of U.S. bee colonies producing honey in 2003 was 2.59 million (based on beekeepers who manage five or more colonies).