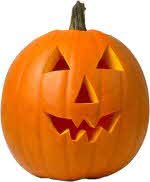 Halloween dates back about 2,000 years to the Celtic festival of 'Samhain.'  The ancient tradition is associated with witches, ghosts and vampires. Today, Halloween has evolved into a child-friendly celebration with dressing in costumes, trick-or-treating and carving pumpkins.

43% of people say the narrow white end of candy corn should be eaten first.

Men (48%) are more likely than women (39%) to give more candy to those with cute or original costumes.

More than 80% of parents confess to eating some of their child's Halloween candy haul.  About 26% wait until the kids go to bed or school before sneaking some candy!

In the U.S., the first recorded instance of a Halloween celebration occurred in Anoka, Minnesota in 1921.

Per capita consumption of candy by Americans in 2002 was 24 pounds; it is believed a large portion is consumed by kids on and during the days immediately following Halloween.

Candy consumption has actually declined over the last few years: in 1997, each American gobbled or savored more than 27 pounds a year.
US Census Bureau