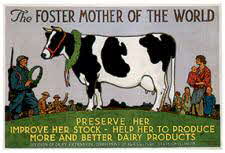 In 2007 there were 57,318 farms in the U.S. that specialized in dairy cattle and milk production, and 69,763 farms that reported sales from milk and other dairy products.

More than 50% of the total value of U.S. sales from milk and other dairy products come from the top 5 states: California, Wisconsin, New York, Pennsylvania and Idaho.

The Dairy Cow (Bos taurus) was designated as the Official Domestic Animal of Wisconsin in 1971.

The average annual milk production per dairy cow in the U.S. today is over 12,000 pounds.

A dairy cow consumes 35 gallons of water, 20 pounds of grain and concentrated feed and 35 pounds of hay or silage (a mixture of corn and grass) in just one day. (Agricultural Council of America)

Dairy cattle remains have been found in various sites in the Near East (Turkey) that date to about 6,500 B.C., although they may have been domesticated as early as 9,000 B.C. The ancestor of all modern domestic cattle is the aurochs, the last of which was killed by a poacher in 1627 on a reserve near Warsaw, Poland.

The world's largest registered Holstein dairy herd can be found in Elsie, Michigan.