Barley is the common name for any cereal grass of the Hordeum genus. Most of the world's barley crop is used for animal feed. A special variety is used in the production of malt for brewing beer. Barley is also used in the distillation of of alcoholic beverages, in the manufacture of vinegar and breakfast foods, and as a thickener in soups. 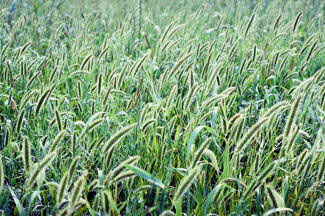 Barley is one of the oldest domesticated grain crops. It has been cultivated for over 8000 years. In Athens barley was, according to Pliny, the special food of the gladiators (the hordearii, or 'barley-eaters').

Barley is grown by the Aymara people on the highest cultivated plot of land in the world at 15,420 feet near Lake Titicaca. The lake is the border between Peru and Bolivia at 12,500 feet, and the area was home to one of the oldest civilizations in the Americas.  The Aymara people that live there still practice ancient methods of agriculture. Potatoes and quinoa are also grown there at slightly lower elevations.

Historians report that up until the 16th century, it was the most important grain on the European continent. It was also used as currency and as a measuring standard.

Almost half the United States crop of barley is used for brewing beer and most of the rest is used for feeding livestock.