Paprika is a spice that is often overlooked by cooks. The only time we think of paprika is when we make potato salad or chicken, using the spice for color to make drab dishes look alive. But paprika is an interesting spice that can be used for much more than a coloring agent.

Paprika is a red powder that is made from grinding the dried pods of mild varieties of the pepper plant known as (Capsicum annuum L.) The pepper plants used to make this spice range from the sweet Bell pepper to the milder chili peppers. The Paprika peppers originally grown were hot. Over time, they have evolved to the milder varieties. In Hungary there are six classes or types of paprika ranging from delicate to hot. The peppers also range in size and shape depending on where they are grown . Some are grown in Spain, Hungary, California and other parts of the U.S. The most commonly produced paprika is made from the sweet red pepper also called the tomato pepper.

Paprika powder ranges from bright red to brown. Its flavor ranges from sweet and mild to more pungent and hot, depending on the type of pepper used in processing. Sweet paprika is the standard. It is mild in flavor. The hot paprika gives your taste buds a jolt. Both varieties are generally carried in most supermarkets. If you cannot find hot paprika in your local supermarket try gourmet stores.

Paprika has been traditionally associated with Hungary, where much of the best paprika is produced today. The first pepper plants arrived in Hungary in the 17th century. Some believe that ethnic groups who were fleeing north from the Turks introduced the peppers to the Balkans. Paprika became commonly used in Hungary by the end of the 18th century. Two towns in Hungary (Szeged and Kalosca) competed against each other for the title of Paprika capital of Hungary.

In the 19th century two Hungarian brothers received awards for the quality of their ground paprika. The Palfy brothers introduced semisweet paprika by removing the stalks and seeds from the pods. This removed the capsaicin which gives the spice its heat. The French chef Escoffier introduced the spice to western European cuisine. He brought the spice in 1879 from Szeged on the river to Monte Carlo. A Hungarian scientist Dr. Szent Gyorgyi won a Nobel Prize in 1937 concerning his work with paprika pepper pods and Vitamin C research. Paprika peppers have seven times as much Vitamin C as oranges.

There are many gardeners that grow their own paprika peppers and grind the pods to make the spices. Some of the recommended breeds to grow are Kolosca and Hungarian peppers. Kolosca is described as sweet with intense aroma. The color is orange-red when ground. Hungarian is mildly sweet with a medium red color.

Peppers need warm weather to grow. It is recommended that you sow the seed 6-8 weeks before transplanting in a high quality mix in a shallow starting tray, about 3 seeds to the inch. The potting soil temperature must be kept above 80Â°F (27Â°C) if possible to encourage germination. It is recommended to use heating cable or set pots on a water heater. The seedlings will emerge in 7 to 15 days. The plants must be kept continuously moist (but not soggy). After 15 days thin the seedlings enough to give each plant about a 2 by 2 inch area. Also if they become too large transplant them into 5 inch pots so you will not hold back their growth.

After germination, move your plants to bright sunlight and keep the soil moist. When transplanting peppers, pick a site that has full sun. Add organic matter to the soil before transplanting. In cooler climates, plant peppers through black plastic and use row covers. Keep the soil evenly moist. Use liquid fertilizer every two weeks. Space the transplants about 18 inches apart with 36 inches between rows. Once established, they are tolerant of drought. 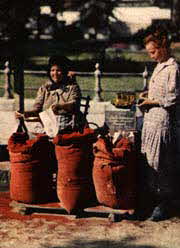 Harvesting is a colorful process. In the villages of Szeged and Kalosca of Hungary, peppers are threaded onto long pieces of string and hung up to dry outside the houses and from garden fences. The length of the pepper chains ranges from region to region. Grinding peppers is an old tradition in Hungary. One of the first methods was to simply crumble the dried pepper pods into a dish using a mortar and pestle. Of course as the demand for paprika increased, the process changed. Water and windmills were then used to grind paprika pods. Today they are ground between stones and steel cylinders.

Allow peppers to turn red before drying and grinding. Snip them off the plant and hang them to dry in direct sun. You may also use a dehydrator but be sure to remove stems and seeds first. Allow the pods to dry until they turn very brittle. Store the peppers in a ziplock bag or in the freezer. Grind them as needed with a blender or coffee grinder.

Paprika deteriorates quickly so it should be purchased in small quantities and kept in airtight containers away from sunlight. If you cannot grow your own then you can buy some good quality paprika at your local supermarket. Szeged Hungarian Paprika is a good quality product. It is sold in 5 ounce containers in the spice section.

Paprika is strongly associated with Hungarian cuisine. They use in dishes such as chicken papirkash and goulash. It is used in many spiced meat products like Spanish chorizos. Many Spanish, Portuguese and Turkish recipes use paprika for soups, stews and casseroles. In India it is sometimes used in tandoori chicken to give it the red color. It is often used as a garnish for salad, appetizers and eggs. In Spain paprika is used to flavor shell fish dishes, rice, and season tomato and green pepper salads.

Paprika releases its color and flavor when heated. So when you sprinkle it over colorless dishes it improves the food’s appearance not its flavor. This is why it is often used as a garnish, not a flavoring. However you can used it as a flavoring by stirring the powder into some oil before adding it to a recipe. You can brush the paprika on meats, poultry, or fish. Its important to remember when using paprika in sauces that it has a high sugar content and burns easily. Add it only when liquid ingredients are present and do not cook it over high heat for too long.

The extractive form of paprika is oleoresin prepared from dried, seeds and ground pods using either hexane or ethylene dichloride. This product is use in certain sausage products, cheeses, soups, and foods where characteristic paprika flavoring and coloring are desired.

Paprika can be used creatively in cooking . Add 2 tablespoons to your favorite pasta sauce. Sprinkle it on potatoes or homemade fries for a change of seasonings. Use it liberally on poultry ,meat, and fish when cooking. Use paprika as a milder seasoning in chili or stews. It can even liven up some soups with color and flavor.

Give paprika a try next time you cook. Don’t forget it can be used for more than potato salad!