The rhizome (root) of galangal resembles ginger in taste and appearance. It is predominantly found in Asian markets and sold fresh, frozen, dried, or powdered. Galangal is also well known in European medieval cooking. Only a pinch of dried and powdered versions are typically needed.

Galangal is frequently used in fish and shellfish recipes in combination with garlic, ginger, chilli, and lemon.

Greater Galangal:
Orange-brown skin with pale yellow or white interior. Greater galangal can be found in sliced form or powder. Used as a flavoring throughout Indonesia, Malaysia, and parts of India.
Flavor: Not as pungent as lesser galangal. 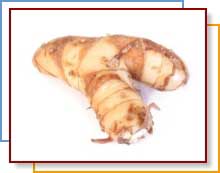 Lesser Galangal:
This rhizome has a red-brown interior and fibrous texture. It can be founded as slices or powder. Lesser galangal comes from China where it is used as a medicinal herb, but it is now grown in Indonesia and regarded as a spice.
Flavor: Aromatic and pungent, peppery and ginger-like. Stronger, more medicinal taste than greater galangal.

Different galangal varieties vary in their hotness and flavor. Flavor ranges from flowery to ginger-like to peppery cinnamon.

In addition to being used as a spice in cooking, galangal has been used in Asia and the Middle East in perfumes, snuffs, aphrodisiacs, and as flavors for condiments (including vinegar and beer), in teas in Germany and wines in Russia. Like ginger, galangal has been used for medicinal purposes to treat nausea, flatulence, and dyspepsia.

Selection and Storage
When ripe, galangal should be ivory white and firm with very little separation between skin and flesh. Never buy galangal that is wrinkled or shriveled. Store refrigerated uncut and unwrapped for up to 3 weeks or, peel the root and place it in a jar of sherry and store it refrigerated for several months. Galangal can be frozen if tightly wrapped in foil.