July, 2013
The Greenbrier, the historic American destination retreat in the foothills of West Virginia's Allegheny Mountains, has announced the appointment of Bryan Skelding as its new Executive Chef, overseeing all 14 dining venues at the resort.

Chef Skelding's relationship with The Greenbrier spans almost the length of his career. He joined The Greenbrier culinary brigade in 2002 as lead chef in the Tavern Room.  After a stint at the famed L'Orangerie in Los Angeles, Skelding returned to West Virginia, and The Greenbrier, as Saucier.  For almost two years, he managed all hot food production for the Main Dining Room and the Banquet department, and in 2005, took over as Chef de Cuisine of Sam Snead's restaurant at The Greenbrier. In 2009, Skelding was brought back to The Greenbrier once again to oversee all F&B operations as Executive Sous Chef. 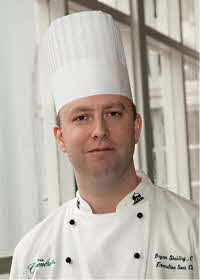 Chef Skelding graduated with a degree in Culinary Arts in 1999 from Madison Area Technical College in Madison, WI, where he also ran the Ishnala Supper Club during his final year in school. Skelding has also cooked at the Royal Hawaiian Hotel in Honolulu and, for nearly two years, was lead cook under Chef Harmut Handke CMC at Handke's Cuisine in Columbus, OH.  Skelding is a Certified Executive Chef, a distinction he earned from the American Culinary Federation in 2011.

With its 14 unique dining establishments, The Greenbrier has become a destination retreat for foodie travelers from around the country.  The Greenbrier Restaurant Collection includes the iconic Main Dining Room, which celebrates its 100th anniversary this year, as well as the Prime 44 West steakhouse, In-Fusion (specializing in Pacific Rim cuisine), Draper's (named for the resort's legendary designer Dorothy Draper), The Forum Italian trattoria and a wealth of other dining options for guests.  And with the recent addition of The Greenbrier Farm, a 40-acre "kitchen garden," nearly all of the produce used in The Greenbrier's kitchens is sourced locally and exclusively for the resort.

ABOUT THE GREENBRIER:
Located in White Sulphur Springs in the Allegheny Mountains of West Virginia, The Greenbrier has been welcoming guests since 1778. Known as "America's Resort," it encompasses more than 10,000 acres of undulating landscape that includes: five golf courses (including the exclusive Greenbrier Sporting Club's private course and the historic Oakhurst Links, located just a 10-minute drive from the resort); a championship indoor and outdoor tennis facility (including five outdoor clay courts and five indoor courts); The Greenbrier Clinic (specializing in executive health); a 40,000-square-foot Five Star mineral spa; a mélange of sporting activities; shops; private homes at The Greenbrier Sporting Club; guests-only casino; and, at its heart, a vast and imposing grand hotel. Purchased in 2009 by West Virginia entrepreneur James C. Justice II, The Greenbrier has undergone a $250+ million restoration and is now home to The Greenbrier Classic, a PGA TOUR FedExCup event, and will soon launch The Greenbrier Medical Institute, a state-of-the-art medical complex on the resort's grounds.