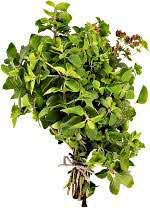 Oregano is generally described as possessing a strongly aromatic, camphoraceous aroma and a slightly bitter, pungent flavor. This pungent flavor is composed of earthy/musty, green, hay and minty notes. The spice imparts a slightly astringent mouthfeel.

Description
This low bushy perennial of the mint family is native to the Mediterranean and has a warm sharp taste with lemon and pepper undertones. Oregano leaves are dark green with delicate hair-like texture underneath. Flowers range in color from pink to purple in the late summer and early fall.

Culinary Uses
Oregano has become an essential ingredient in many Italian dishes including pizza, pastas, and roasted vegetables. Oregano paired with basil are the basis for many Italian seasonings.

It is also widely used in Greek and Mexican cooking. As the main herb flavoring in chili powder, oregano holds up well in a mix with other flavors. The Greeks enjoy oregano in baked fish and it is the main flavoring in Greek salad.

Try adding sprigs of oregano on the coals of a grill for a flavor infusion to whatever you are cooking on top. Oregano's rich flavor also deepens and melds flavors of soups and sauces without overwhelming the dish.

Oregano can be used either fresh or dried. When using the fresh herb, use twice the amount as dried.

Other Uses
Infuse bathwater with oregano for a relaxing soak. Oregano is also used in potpourri and pillows.

Storing
Fresh oregano tightly sealed in a plastic bag will keep in the refrigerator for up to 2 weeks.
Florida Dept of Agriculture