All dried figs harvested in the U.S. are grown in California's Central Valley area. Dried Fig production in California has averaged 28 million pounds over the last five years.

Captain Bligh is credited with planting the first fig tree in Tasmania in 1792.

In 812 AD, Charlemagne attempted to introduce the fig to the Netherlands, but was unsuccessful because the fruit could not adapt to the cold weather.

In ancient Greece, figs were regarded with such esteem that laws were created forbidding the export of the best quality figs. Sycophant then derives from the Greek word meaning one who informs against another for exporting figs or for stealing the fruit of the sacred fig trees. Hence, the word came to mean a person who tries to win favor with flattery.

Fig trees are of the genus Ficus, in the mulberry family.  The rubber plant, a popular house plant, the Bo tree (sacred to Buddhists), and the Banyan tree are also species of Ficus.

The fig was used by the ancient Egyptians as long as 6,000 years ago.  They were a favorite of Cleopatra. They also grew in the Hanging Gardens of Babylon.

A handful of 11,400 year old dried figs have whetted the appetites of anthropologists. The figs, found in the abandoned village of Gilgal 1 in the Lower Jordan Valley in Israel, appear to be the first domesticated plants. Researchers from Harvard University and Bar-Ilan University in Israel say the figs came from an unusual variety of tree whose fruit grows sweet and soft - but happens to be sterile. Thus the people of Gilgal must have learned to cultivate new trees by planting shoots.
Smithsonian (8/2006)

Figs are the sweetest of all fruits, with a 55% sugar content. The flower of the fig is inside the fruit, so there are no blossoms on fig trees. Sort of like an inside out strawberry.

The fig, one of mankind’s oldest fruits, is only now receiving its due attention in homes across the United States. 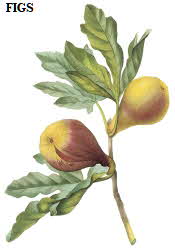 Although considered a fruit, the fig is actually a flower inverted into itself. They are the only fruit to ripen on the tree. Originally native from Turkey to northern India, the fig fruit spread to many of the Mediterranean countries. The primary producers of dried figs today are the United States, Turkey, Greece, and Spain. This highly nutritious fruit arrived in the United States by Spanish missionaries settling in Southern California in 1759. Fig trees were soon planted throughout the state.