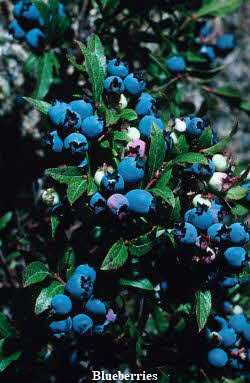 Blueberries are the 2nd most important commercial berry crop in the United States, with a total crop value of nearly $850.9 million in 2012.  (Strawberries are number 1)

Maine is the leading produces of 'wild' or lowbush blueberies, harvesting 91.1 million pounds in 2012.

The Blueberry (Genus Vaccinium) was designated as the Official Blue Berry of North Carolina in 2001.

Did you know.....that early American colonists made grey paint by boiling blueberries in milk.

The blue paint used to paint woodwork in Shaker houses was made from sage blossoms, indigo and blueberry skins, mixed in milk.

There are 16 people in the U.S. listed on whitepages.com with the last name 'Blueberry'
(Mark Morton, 'Gastronomica', Fall 2010)

If all the blueberries grown in North America in one year were spread out in a single layer, they would cover a four-lane highway that stretched from New York to Chicago.
(The Great Food Almanac)

Blueberries have been commercially cultivated only since the early 20th century, when the USDA helped develop new improved varieties.

Blueberries contain significant quantities of both antibacterial and antiviral compounds, and have a reputation in northern Europe of fighting infections.They may also help protect against heart disease.

The blueberry is the official berry of Nova Scotia.

In 1991 Maine designated the Wild Blueberry as the Official State Berry.

Wild blueberries are grown on 60,000 acres in Maine, and 99% of this wild blueberry crop is frozen. (Although some of these are later canned).