Chayote is a gourd-like member of the squash family that is about the size and shape of a very large pear. The skin is pale green and smooth with slight ridges that run lengthwise. Many compare the color to a light green apple. The flesh is white and there is one soft seed in the middle. Chayote is grown in several states including California, Florida, and Louisiana, but it is native to Latin America. Historically, this squash was one of the primary foods of the Aztecs and Mayas. Chayote is also called mirliton and the French call it christophene. 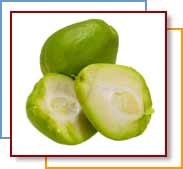 Select squash that are small, firm and unblemished; just as you would select a pear. Choose squash that is heavy for its size. Tender skin, skin that reacts to pressure, often means poor quality. Chayote is commonly found in supermarkets during peak season (December to March), but may be found in larger supermarkets and specialty markets throughout the year.

Refrigerate whole chayote in a plastic bag for up to one month. Cut chayote may be refrigerated in a covered container or tightly wrapped for 3 to 5 days. It is best to use chopped chayote immediately, as it can gather flavors from other foods stored in the refrigerator.

Chayote has a bland-tasting flesh that may be used in several ways. It may be prepared in similar ways to other summer squash, such as zucchini, but may require peeling and a bit more seasoning. Chayote is most commonly used in side dishes, stews, and casseroles. It may also be sliced in half and baked. The soft seed is edible, but many choose to remove it.