BOTTLED WATER: BETTER THAN THE TAP?
By Anne Christiansen Bullers

The FDA also classifies some bottled water according to its origin.

Artesian well water. Water from a well that taps an aquifer--layers of porous rock, sand and earth that contain water--which is under pressure from surrounding upper layers of rock or clay. When tapped, the pressure in the aquifer, commonly called artesian pressure, pushes the water above the level of the aquifer, sometimes to the surface. Other means may be used to help bring the water to the surface.
According to the EPA, water from artesian aquifers often is more pure because the confining layers of rock and clay impede the movement of contamination. However, despite the claims of some bottlers, there is no guarantee that artesian waters are any cleaner than ground water from an unconfined aquifer, the EPA says.

Mineral water. Water from an underground source that contains at least 250 parts per million total dissolved solids. Minerals and trace elements must come from the source of the underground water. They cannot be added later.

Spring water. Derived from an underground formation from which water flows naturally to the earth's surface. Spring water must be collected only at the spring or through a borehole tapping the underground formation feeding the spring. If some external force is used to collect the water through a borehole, the water must have the same composition and quality as the water that naturally flows to the surface. 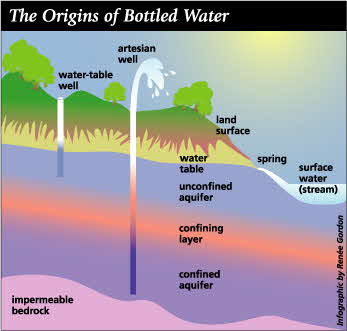 Well water. Water from a hole bored or drilled into the ground, which taps into an aquifer.
Bottled water may be used as an ingredient in beverages, such as diluted juices or flavored bottled waters. However, beverages labeled as containing "sparkling water," "seltzer water," "soda water," "tonic water," or "club soda" are not included as bottled water under the FDA's regulations, because these beverages have historically been considered soft drinks.

Some bottled water also comes from municipal sources--in other words--the tap. Municipal water is usually treated before it is bottled.

Examples of water treatments include:

Distillation. In this process, water is turned into a vapor. Since minerals are too heavy to vaporize, they are left behind, and the vapors are condensed into water again.
Reverse osmosis. Water is forced through membranes to remove minerals in the water.
Absolute 1 micron filtration. Water flows through filters that remove particles larger than one micron in size, such as Cryptosporidium, a parasitic protozoan.
Ozonation. Bottlers of all types of waters typically use ozone gas, an antimicrobial agent, to disinfect the water instead of chlorine, since chlorine can leave residual taste and odor to the water.
Bottled water that has been treated by distillation, reverse osmosis, or other suitable process and that meets the definition of "purified water" in the U.S. Pharmacopeia can be labeled as "purified water."

Bottled vs. Tap
Whether bottled water is better than tap water, and justifies its expense, remains under debate. Stephen Kay, vice president of the IBWA, says member bottlers are selling the quality, consistency and safety that bottled water promises, and providing a service for those whose municipal systems do not provide good quality drinking water.

"Bottled water is produced and regulated exclusively for human consumption," Kay says. "Some people in their municipal markets have the luxury of good water. Others do not."

Thornley, of the Minnesota Department of Health, agrees that consumers can depend on bottled water's safety and quality. But he says consumers should feel the same way about the quality of their tap water. Tap water may sometimes look or taste differently, he says, but that doesn't mean it's unsafe. In fact, the most dangerous contaminants are those that consumers cannot see, smell or taste, he says. But consumers don't need to worry about their presence, he adds. Municipal water systems serving 25 people or more are subject to the federal Safe Drinking Water Act. As such, the water constantly and thoroughly tested for harmful substances, he says. If there is a problem, consumers will be warned through the media or other outlets.

"In lieu of being told otherwise, consumers should feel confident of the safety of their water," Thornley says.

Dr. Robert Ophaug, a professor of oral health at the University of Minnesota School of Dentistry, notes that tap water has another advantage many people don't think about: It typically contains fluoride. Many communities have elected to add fluoride to drinking water to promote strong teeth and prevent tooth decay in residents, though some groups continue to oppose this practice and believe it's detrimental to health.

Ophaug says bottled water often does not have fluoride added to it. Or, if it has been purified through reverse osmosis or distillation, the fluoride may have been removed. People who drink mostly bottled water, especially those who have children, need to be aware of this, he says. They may need to use supplemental fluoride that is available by prescription from dentists or doctors. The supplements are usually recommended for children ages 7 to 16. Fluoride supplements cost around $15 for a three-month supply.

"At the least, inform the children's dentist or doctor that you are relying on bottled water," Ophaug says.

Surging Sales
Consumers don't appear ready to give up their bottled water any time soon. Younger, health-oriented people are driving the market's growth, according to industry officials. "They've grown up with bottled water, and it doesn't seem like such a stretch to them to buy water," says Kay.

Jeremy Buccellato, 31, of Ramsey, Minn., says he's heard the arguments that tap water is just as good if not better than bottled water. A glass from his own tap, however, provides water that's discolored, chlorinated, and tastes like "pool water." Buccellato says the extra money he spends on bottles of Dasani water is worth it.

"It tastes better and looks better, plus it's easy to take with me," says Buccellato. "What's not to like?"

Harrison agrees that there's nothing like a refreshing cool bottle of water to beat the heat during an Oklahoma summer.

"It's a product that fits our needs and our lifestyle," she says.

To Filter or Not to Filter?
Consumers can buy purified water. They also have the option of doing it at home.

Numerous companies sell filtration systems. Some attach to the faucet and filter the water as it comes through the tap. Others are containers that filter the water in them. Among the best-known manufacturers are PUR and Brita.

Water purified with these products typically costs less than buying bottled water. According to Brita, its high-end faucet filter system provides water for 18 cents a gallon, a considerable saving from $1 or more typically charged for an 8- to 12-ounce bottle of water.

Stew Thornley of the Minnesota Department of Health agrees that home filtration systems can improve the taste or appearance of tap water at a minimal cost. However, Thornley points out that consumers need to be careful about maintaining these filters. Typically, specific instructions are included with the purchase of the product. Without proper maintenance, he says, it's possible bacteria or other contaminants can build up in the products.