Dear EarthTalk:
I heard that my food choices can affect the use and therefore availability of fresh water around the world. How so?
Denise Beck, Washington, DC

Our food choices and the availability of fresh water are inextricably linked. The crux of the problem is that human population numbers keep growing—we recently topped seven billion people worldwide—yet the amount of fresh water available remains finite. And growing food and raising livestock to feed increasing numbers of humans takes a great deal of water. Worldwide, some 70 percent of fresh water is used for agriculture. The United Nations Food and Agriculture Organization (FAO) estimates that, by 2050, two-thirds of the people on the planet will lack clean water to meet even basic needs. 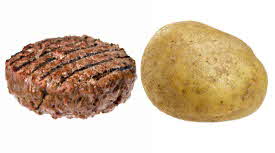 2,400 liters of water go into the production of one hamburger, while only 25 liters are needed to produce a potato.

According to the Vegetarian Resource Group, the livestock industry is the largest user of fresh water in the U.S. and in many other countries. The billions of livestock animals raised for food around the world each year consume substantial amounts of water directly. The industry also negatively impacts the replenishment of fresh water through the compaction of soil, the degradation of banks along watercourses, the clearing of forests to expand grazing, and other factors.

An even larger issue is the water needed to grow the feed that livestock eat. Researchers for the 2006 FAO report “Livestock’s Long Shadow” report that 2,400 liters of water go into the production of one hamburger, while only 25 liters are needed to produce a potato. Likewise, a cheese pizza requires 1,200 liters of water—given the drinking, cleaning and feed needs of dairy cows—while a tomato pizza only needs 300.

Eliminating meat consumption would be a surefire way to save vast amounts of fresh water, and switching to a vegetarian or vegan diet is one way an individual can make a big impact on water consumption. “On average, a vegan, a person who eats no meat or dairy, indirectly consumes nearly 600 gallons of water per day less than a person who eats the average American diet,” reports Sandra Postel, director of the Global Water Policy Project and the lead water expert on the National Geographic Society’s Freshwater Initiative.

But those loathe to giving up meat entirely should consider switching to only grass-fed beef. According to Postel, it takes some 5,300 liters of fresh water for every dollar’s worth of grain fed to a typical beef cow, while the water required to feed grass-fed cattle falls on the pasture from the sky, meaning it is free and does not deplete groundwater reserves at all. “Not all burgers are created equal,” she says.

Postel adds that another way to cut down on one’s water footprint would be to give up or cut back on coffee: One cup takes some 55 gallons of water to make, with most of used to grow the coffee beans.

Choosing organic food can also help keep an individual’s indirect water consumption in check. Organic farming techniques conserve water both by using less, increasing the water-holding capacity of soils and reducing erosion as well as by not polluting nearby water bodies with run-off from synthetic chemical inputs.