Dear EarthTalk:
I was wondering how toxic chlorine is, because my well water was just chlorinated yesterday and today the smell is still strong. I have a 4-year-old daughter and I’m concerned.
Rose Smith, via e-mail

According to the U.S. Environmental Protection Agency (EPA), chlorine levels of four parts per million or below in drinking water—whether from a private well or municipal reservoir—are acceptable from a human health standpoint. Inexpensive home drinking water test kits (from $5 on up) that can detect levels of chlorine and other elements in water are widely available from online vendors. Administering the tests is easy and can provide parents with a way to involve kids in science for a practical purpose right at home. 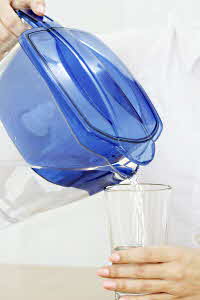 The most affordable approach is to filter it at the faucet or with a pitcher-mounted filter.

Chlorine was first used in drinking water to reduce waterborne infectious diseases in Jersey City, New Jersey more than a century ago. It was so effective at destroying potentially harmful bacteria and viruses that the practice soon spread far and wide. Today some 98 percent of water treatment facilities in the U.S. use some form of chlorine to clean drinking water supplies. The American Water Works Association (AWWA), a trade group representing water utilities across the country, credits the presence of chlorine in drinking water with a 50 percent increase in life expectancy for Americans over the last century. Indeed, some consider the chlorination of drinking water to be one of history’s greatest public health achievements.

But others aren’t so sure that any chlorine in drinking water should be considered safe. Opponents of chlorination point to studies linking repeated exposure to trace amounts of chlorine in water with higher incidences of bladder, rectal and breast cancers. The problem lies in chlorine’s ability to interact with organic compounds in fresh water to create trihalomethanes (THMs), which when ingested can encourage the growth of free radicals that can destroy or damage vital cells in the body. Besides cancer, exposure to THMs has been linked to other health issues including asthma, eczema, heart disease and higher miscarriage and birth defect rates.

Those with their own private wells who are skittish about chlorine have other options for disinfecting their water. One baby step would be to replace chlorine with chloramine, an ammonia derivative that doesn’t dissipate into the environment as rapidly as chlorine and has a much lower tendency to interact in bad ways with organic compounds in the water. However, traces of chloramine in the water may not be to everyone’s liking either, because it causes rashes after showering in a small percentage of people and can apparently increase lead exposure in older homes as it leaches the heavy metal off old pipes.

Another option, though somewhat costly, would be to purchase a machine to purify the water. Ozonation units, which disinfect by adding ozone molecules to water and leave no residues, start at around $9,000. Another choice would be a UV light treatment machine—at $6,000 or more—which cancels out viruses and bacteria by passing the water through UV light rays. The Clean Water Store is a reputable vendor and good online source for such water treatment equipment.

Perhaps the most sensible and affordable approach is to filter the water at the faucets and taps. Carbon-based tap- or pitcher-mounted filters can work wonders in removing impurities from drinking water. They can even be installed on shower heads for those with sensitive skin.