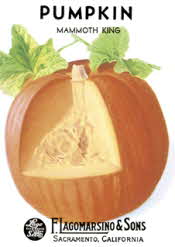 There were 50,900 acres of pumpkins harvested in the U.S. in 2013 with an estimated value of almost $150 million.  Illinois led the country by producing an estimated 547.6 million pounds, followed by California, Ohio, Michigan, New York and then Pennsylvania. (USDA)

According to the University of Illinois, 90 percent of the pumpkins grown in the United States are raised within a 90-mile radius of Peoria, Illinois.

There are 21 people in the U.S. listed on whitepages.com with the last name 'Pumpkin'
(Mark Morton, 'Gastronomica', Fall 2010) 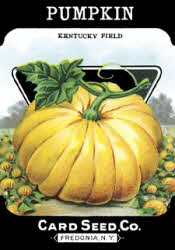 99% of all pumpkins are sold for decorations.

Pumpkins are about 90% water.

Pumpkins were once recommended for removing freckles and curing snake bites!

Pumpkin takes its name from the medieval French word 'pompom', meaning 'cooked by the sun.'  (Ultimately, probably from the Greek 'pepon.')

New Hampshire designated the Pumpkin (Cucurbita mixta) as its Official State Fruit in 2006.

The value of all pumpkins produced by major pumpkin-producing states was $117 million.

One of the first published recipes for pumpkin pie (Pompkin Pudding) was in Amelia Simmons’ 1796 cookbook, ‘American Cookery’. This the first cookbook to be written by an American and published in the United States.

The winner of the 2003 biggest pumpkin contest weighed 1,140 pounds.

When Howard Dill of Ontario, Canada, known as the Pumpkin King, sent one of his championship pumpkins to the U.S. for a competition, customs officials called drug agents, not believing that there could be a 616 pound pumpkin in the crate.

Championship pumpkins today are over 1000 pounds. These pumpkins grow 10 to 15 pounds or more per day!

Pumpkin halves were supposedly used as guides for haircuts in colonial New Haven, Connecticut, giving rise to the nickname 'pumpkinhead.'