The Best Of British Prison Food 1

I have always had an interest in food and cooking and it came as a particular delight when in my last five years of service, I became head of an Investigation and Audit team in one of London's biggest prisons.  Part of the team's task was to inspect and report on conditions in prison kitchens.

To enable me to undertake the work, I had to do a great deal of research and knowledge gathering to enable me to carry out this function.  Food handling and hygiene being just one of the basic areas to cover.  Food preparation techniques, balanced diets, specialist medical diets are all part of the daily life of a prison, or indeed any other type of institutional kitchen.

Every prison in Britain is inspected by an independent body, HM Prison Inspectorate, on an irregular basis.  Therefore, it is essential that every prison kitchen is organized, maintained and managed at the very highest standard at all times.  In the late 1980's, HM Prison Service lost the safety of, “Crown Immunity”.  This prevented any form of prosecution through the courts for any infringements of the law.  The 'Crown' could never prosecute itself – The Crown verses Crown.

In effect, it meant that a prison could now receive severe sanctions for poor performance in any area, particularly Health & Safety and catering.  It could also mean that the prison kitchen could even be closed down if found to be in a poor state of management, maintenance or hygiene.  This was highlighted very clearly in September of 2009 when 370 prisoners at London's largest prison, HMP Wandsworth were struck down with salmonella poisoning.  If a prison kitchen were suddenly ordered to close down, you can imagine the chaos this would cause.  HMP Wandsworth is the largest prison in Western Europe and holds over 1,600 prisoners. How do you provide over 4,800 meals a day at very short notice?  The only hope of keeping the roof on the jail is to ensure that the Emergency Contingency Planners have done their homework and an alternative system can be brought on line with immediate effect. 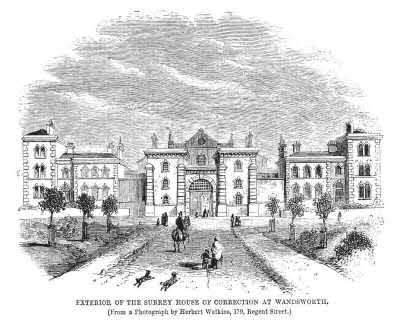 How it used to be

Until the 20th. Century, the provision of food in prisons was part of the punishment.  Lack of food was a punitive measure in itself and starvation was not unknown.  During the 14th century, prisoners slept on bare earth and were given only bread and water – every other day.  If prisoners wanted to eat, they had to pay for it.  By the 18th century little had changed.  At least prisoners were given bread and water every day – depending on availability.  It was accepted by the public and the authorities that a restricted diet should form part of the punishment.

Wandsworth Prison was built in 1851.  It was one of the earliest London prisons and was originally called the Surrey House of Corrections. Mayhew & Binney, in their 1868 edition of, “Criminal Prisons of London”,  describe vividly the life inside the London prisons in the 1800's.  Food did not seem very high on the agenda of the prison system at this time.  Containment seemed to be the priority.  The Surrey House of Correction was indeed built to help to reduce overcrowding at the Houses of Correction at Brixton, Guldford and Kingston, where “jail fever” was rampant and prisoners were dying.

When inspecting the Surrey House of Corrections in 1862, Mayhew and Binney noted the menu and diets of the various classes of prisoners held at the prison.
Convicted prisoners employed at 'hard labour' for terms exceeding 21 days were allowed the following meals:

Breakfast: 1 pint of oatmeal gruel and 6 oz of bread

Dinner Sunday & Thursday: 1 pint of soup and 8 oz of bread 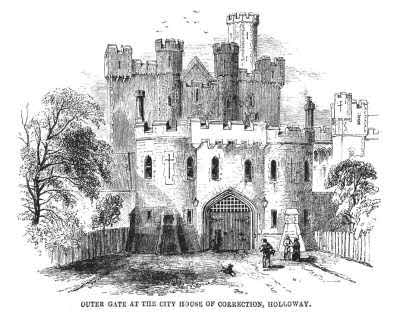 As you may well imagine, the low calorific and nutritional values of such a diet would lead to serious health problems – jail fever.

When I worked at Highdown High Security prison in Surrey, we presented the Lord Lieutenant of the County with a framed copy of the recipe for Gruel.  The Governor of the prison at the time, Stephen Prior, took the Lord Lieutenant and his wife home for dinner and guess what was first on the menu – prison gruel.  He actually loved it!  So much so that he instructed his own chef to add it to his dinner party menus to impress his guests (I bet it did!).

This is the original recipe from  the Surrey House of Corrections kitchen circa. 1862:

Ingredients for Soup and Gruel:  The soup to contain, per pint, 3 ounces of cooked meat, without bone, 3 ounces of potatoes, 1 ounce of barley, rice, or oatmeal, and 1 ounce of onions or leeks, with pepper and salt.  The gruel to contain 2 ounces of oatmeal per pint.  The gruel on alternate days to be sweetened with three quarter ounces of molasses or sugar and seasoned with salt.
In seasons when the potato crop has failed, 4 ounces of split peas made into a pudding may be occasionally substituted; but the change must not be made more than twice in each week.  Boys under 14 years of age to be placed on the same diet as females.

The female diet was the same as the male prisoner diet with the exception that where the male received 8 oz of bread the female would receive 6 ounces.

For those prisoners serving less than seven days, the menu was very basic:

These prison diets lasted well into the 1900's and bear no comparison to today’s prison food.  Modern prisoners wouldn't stand for it and the authorities could never allow it.  Even the punishment diet of bread and water was removed from the Prison Rules in the 1960's.  The term, “Doing Porridge” still remains an  avid description of someone who is in prison, referring of course, to the old diet of oatmeal gruel.